Naperville Central’s Bobby McMillen is Sun Player of the Year

Bobby McMillen, the Naperville Sun’s Player of the Year, put on a hitting display from Day 1 through the very end of the season 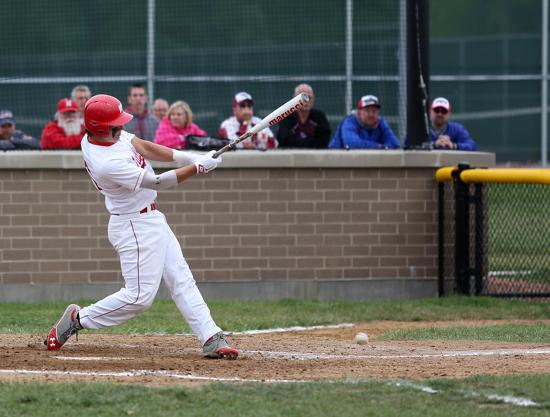 Naperville Central's Bobby McMillen gets an RBI base hit against Plainfield North during the Class 4A Regional Finals in Naperville. | Mike Mantucca/For Sun-Times Media

It’s a no-brainer that Bobby McMillen would play football. The junior helped the Redhawks win a Class 8A state title last fall and committed to play at Iowa State.

After what transpired this spring, however, perhaps McMillen hits a baseball even harder than he tackles, and that’s saying something.

McMillen, the Naperville Sun’s Player of the Year, put on a hitting display from Day 1 through the very end of the season, leading the Redhawks to a DuPage Valley Conference championship.

“If I was on the other team, I don’t even now if I’d even pitch to him,” Naperville Central senior pitcher Pat Maloney said. “He’s one of the most feared hitters in the DVC, if not the most feared.”

With those aforementioned numbers, McMillen was chosen as the DVC Player of the Year. Naperville Central coach Mike Stock likened McMillen’s stats to those of a men’s 12-inch softball player.

“I’ve never had a player have this kind of season before,” Stock said. “I’m not saying he’s the greatest player we’ve ever had, but I don’t know of anyone who has had a season like he had.”

McMillen hit all the time, especially with the game on the line. He rocketed a clutch homer late in the season against Naperville North that allowed the Redhawks to clinch the DVC title on their home field.

“He had one of those seasons where coaches were looking six to seven batters ahead to determine when he was coming up,” Stock said. “He was that impactful. You see it in football and basketball, but rarely do you have someone in baseball who can make that much of an impact throughout a game.”

McMillen talked often about having fun. His father stressed to him that sports are supposed to be fun. McMillen bought in, and the hit parade ensued.

“My dad is the biggest influence and he’s always the one to push me and tell me to have fun,” he said. “As the season went on, and I was having success, he told me stay humble and play the game like you have for the past 10 years — for the love of it.”

If McMillen continues to hit, perhaps his future is even brighter playing five or six days a week rather than every Saturday or Sunday.

“It’s something I’ve talked with Coach Stock about because a lot of coaches have been calling and I’ve been invited to some showcases,” McMillen said. “It’s in the back of my mind and I’ll keep my options open, but right now I’m completely happy to be going to Iowa State to play football as a Cyclone.”