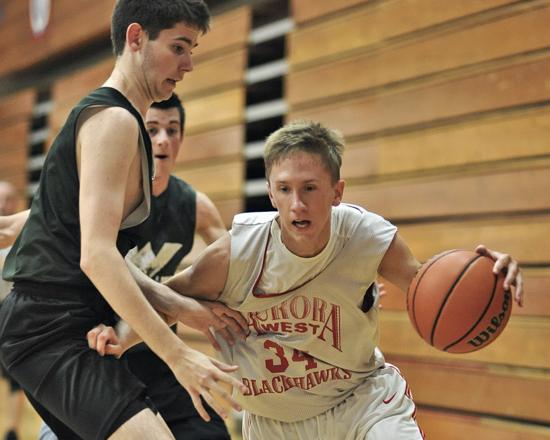 He’s paid his dues and it’s paying off.

“I didn’t really expect to be brought up,” Koth said between games at last weekend’s Hoops Mountain West Shootout.

Of the three, he was low man on the totem pole. He saw action in only 12 games that season while Griffin and Dunn played in 24. None, though, were idly spinning their wheels.

“Practice was really better for me. I went against Spencer and Chandler and had to guard them every day,” Koth said of the physical 6-2 senior Thomas twins.

He also got playing time in junior varsity games.

Last season, Koth moved into the starting lineup alongside his two classmates and senior guard Jontrell Walker and sophomore center Carleton Williams in what amounted to a three-guard lineup.

“He’s a little bit of a forgotten man,” West assistant coach Paul Kieffer said. “Everybody wants to talk about (NCAA Division I prospect) Roland and (point guard) Matt. Tommy has to play big for us because we don’t have anybody else. He’s one of our tougher kids, actually.”

The 6-foot-2 Koth, probably a bit generously listed at 165 pounds as a sophomore, put on 20 pounds of muscle entering last season and it was reflected in his play.

This summer, with Griffin nursing a sprained toe and Williams unavailable because he’s spending time with his father, who lives in Florida, Koth has had to put in more time on the frontline.

“He’s playing the 5 right now with Roland and Carleton gone,” noted Dunn. “Six-two, playing a 5, but he don’t back down.”

Koth, noting “confidence and experience” as key factors in his improvement, expects his role to expand again this season.

“Without (graduated) Jontrell, I’m probably gonna have to score a little bit more and continue to rebound,” he said.

Kieffer has confidence in him.

“He does a lot of rebounding for us and he’s very aggressive, defensively,” the assistant coach said. “He does a lot of things that don’t really necessarily show up in the box score that we need. We’ve needed him inside this summer since we’re short-handed, but we need him there when the season comes, too.”

His deceptive quickness helps in that regard.

“He is a guard,” Kieffer said. “And when he goes to college and plays college basketball, that’s what he wants to do. We just need him inside because of our lack (of size).

“He’s got guard skills. He can take the ball to the basket. In fact, one of our offenses is designed to get him the ball at the top of the key, were he can drive and go one-on-one. A lot of times, he gets bigger guys on him and he can beat ‘em to the basket.”