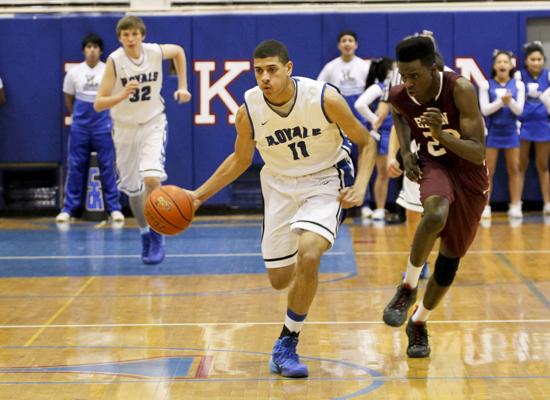 Although a sophomore this fall, Larkin’s Christian Negron already has his first NCAA Division I basketball scholarship offer.

During Larkin’s participation at last week’s DePaul Team Shootout, Negron received an offer from the host Blue Demons and coach Oliver Purnell. Considering Negron has three years of high school left, it’s likely to be the first of many such offers for the 6-6 multi-purpose player.

“It was pretty exciting,” Negron said. “It kind of came unexpected. I was called into a back room and I was curious about what he was going to say.

“Earlier one of the assistant coaches there told me they were interested in me and liked the way I was playing, so there was a little bit of foreshadowing.”

Although Negron impressed with his rbounding and defensive skills near the basket, DePaul is viewing Larkin’s young leader as someone who can play away from the hoop.

“He’s big, he’s long and people think like he’s a big guy, but he’s a winger,” Larkin coach Deryn Carter said. “That’s what all the college coaches want him as.

“He’s going to play the wing for us. As he gets better, he’s going to make everyone else around him better.”

As a freshman, Negron averaged 9.5 points, 7.5 rebounds, 1.6 assists and blocked 58 shots for the Upstate Eight River champion Royals. That team lost four starters and a handful of bench players to graduation, and this summer, Larkin has set about rebuilding around their young star.

“This year and with this team my role definitely expands,” Negron said. “It kind of goes unsaid with all of the guys we lost from last year. I think I’m fitting into the role well.”

The DePaul tournament proved big not just for Negron, but the entire team, according to Carter.

“Our record there wasn’t very good, but I think we turned a corner,” he said. “Something like that can really open some eyes.”

Larkin played Crispus Attucks of Indianapolis, the famed school that produced Hall of Famer Oscar Robertson. The Royals also played Springfield Lanphier, Morgan Park, Hyde Park and Bogan. They’ve also been playing in the Geneva summer league, and last weekend showed they learned something at the DePaul tourney by winning their first four games at the 10th annual West Aurora Hoop Mountain Shootout before losing a close one to Bogan and missing the semifinals.

Junior Tanner Gardon, a 6-7 forward, displayed an offensive game he hadn’t previously shown with finger rolls and outside jumpers.

With their backcourt depleted by graduation, the Royals relied on senior Charles Sanders and junior A.J. Hunter, with juniors Keyvon Kyles and Keion Adams at the point. Their only other seniors are guard DeShawn Stewart, wing Eric Gorman and forward Trenten Jackson.

“I’m really proud of our guards,” Negron said. “At DePaul they were able to hang with those guards, some of the best guards in the state.”

Larkin will continue its summer league play this week and closes its summer program the first weekend in July at the Crystal Lake South Gary Collins Shootout.

In July, Negron will be involved with the prestigious Mac Irvin AAU program.