Laren Eustace was the catalyst for Batavia’s historic 32-4-1 run this spring to earn Beacon-News Baseball Player of the Year honors. 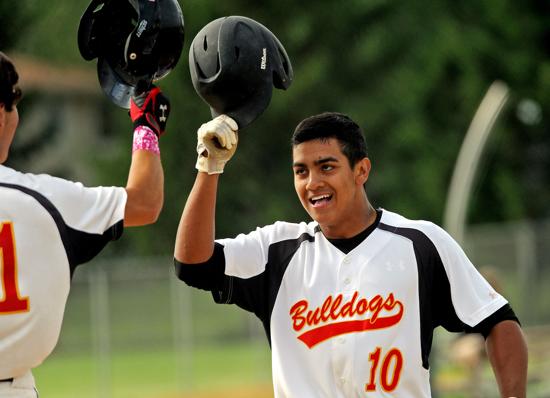 To give people an indication of just how fast Batavia center fielder Laren Eustace is, he hit seven triples this season.

That is an eye-opening total, but the most startling fact isn’t that he had seven, it’s how those triples ended.

He never slid. On every triple, he was either gliding in or making the turn to see if he had a chance to score.

“He just adds a whole other element to your team,” Bulldogs coach Matt Holm said. “He’s coming around first knowing if the throw is at the wrong angle, he’s taking it. You can’t coach that.”

Eustace, the Beacon-News Baseball Player of the Year, was the catalyst for Batavia’s historic 32-4-1 season. He hit .419 with 40 runs scored, eight doubles, seven triples, five home runs, 28 RBIs and 17 steals.

The Indiana recruit also was a hard-throwing reliever and a defensive standout in center.

Four of his five home runs led off games, including a win over West Chicago in the sectional semifinals.

“I think I did pretty well,” the understated Eustace said. “I kept the slumps to a minimum this year. I stayed pretty level-headed throughout the year. My experience the last two years helped a lot. The guys around me were always supportive. I’m really thankful for that.”

Eustace has come a long way from his sophomore season. The more strength he added, the more lethal he became with the bat. His slugging percentage this season was better than most power hitters in the middle of the lineup, .765.

“He bulked up, and it was top-notch conditioning,” Holm said. “He is a really hard-working kid that gets the most out of everything he’s got. Sophomore year, he was a slap hitter, try to beat it out. By the time he was a senior this year, it’s a harder day to hit home runs with the bats we have now, and he hit five.”

The season didn’t end the way Eustace and his teammates had hoped as the Bulldogs were upset by South Elgin in the sectional finals, breaking a 24-game winning streak.

But aside from the wins and losses, few teams played with as much joy and had as much fun as this year’s edition of the Bulldogs.

“It was a fun run, for sure,” Eustace said. “Besides the end result, it was close to a picture-perfect senior year for me and my team. It stung. It took a while for me to get past. It was really weird. I couldn’t do anything about it, watching it unfold in the outfield. It was a shock to me. Now, I’m over it.”

Eustace has already begun the next step on his journey, starting summer classes Monday at Indiana.

Holm believes that Indiana will not be the last stop he will make in his career.

“My son Axel asked me, ‘Which one of your guys do you think could be playing here?’” Holm said. “I know Laren could play here right now. That’s the kind of impact he could have.”