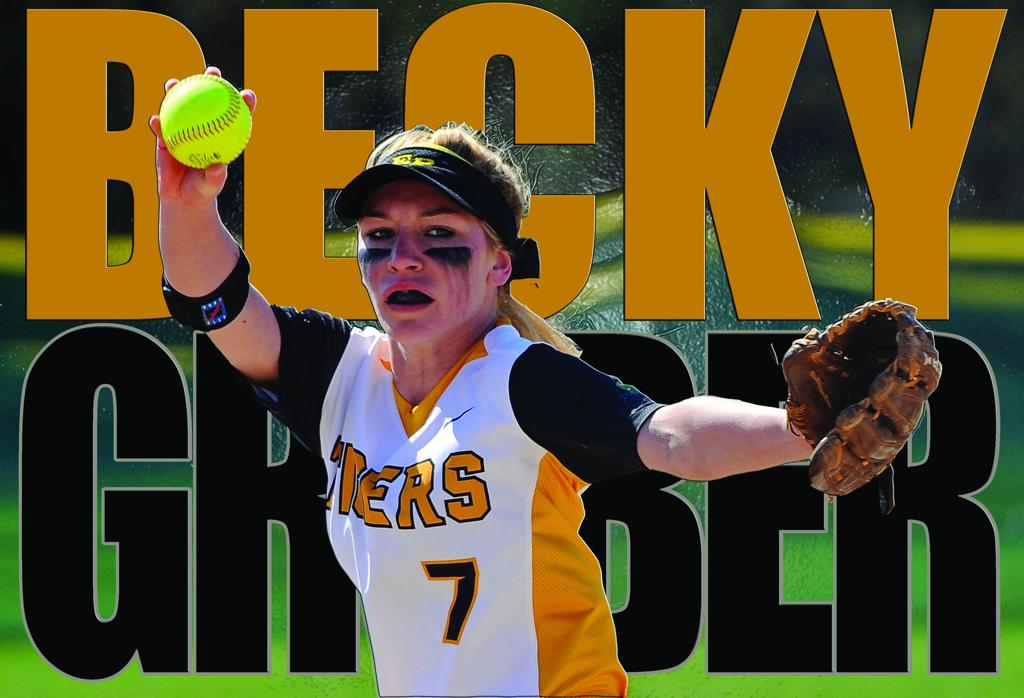 Pioneer Press Softball Player of the Year Becky Gruber finished 8-10 with a 3.30 ERA and had 72 strikeouts in 107 innings pitched for Elmwood Park. | Photo illustration by Ian Waddick

The Tigers expected Gruber to hit one home run after another this season, and the senior delivered, belting 17 home runs and driving in 57 runs en route to being named the 2014 Pioneer Press Softball Player of the Year.

“When I’m on deck, I can hear them [saying], ‘Becky, hit it to center field,’ or ‘Hit the scoreboard.’ I’m just trying to make contact,” Gruber said. “Now when I go up, I have a clear mind with runners on base. I think about what I have to do as a player to get my teammates to score.”

“My swing was long,” Becky Gruber said. “With faster pitching, I couldn’t get to pitches that were quicker.”

Becky Gruber averaged 2.4 RBI per game and drove in seven runs in a game against Riverside-Brookfield. She had five RBI against Ridgewood. Becky Gruber, who plans to continue her career at Division III North Park, struck out twice in 80 at-bats on the season. She batted .696 with 39 runs and a .728 OBP.

“Becky is a tremendous hitter,” Glenbard South coach Julie Fonda said. “… You cannot let the ball get in on her because she will make you pay.”

Becky Gruber also showed her versatility this season after being a starting infielder since her freshman season. When Elmwood Park’s starting pitcher left the team early in the season, Becky Gruber stepped in to pitch despite not throwing from the circle since the fourth grade. She finished 8-10 with a 3.30 ERA and had 72 strikeouts in 107 innings pitched.

“The last time I pitched was in a house league at Hiawatha Park. In middle school, I became a shortstop,” Becky Gruber said. “It wasn’t that hard. I knew the basic mechanics. I struggled to hit my spots, but I learned.”

Becky Gruber became a part-time pitcher and won eight of the Tigers’ 11 games this season.

“She is a leader by example,” Elmwood Park coach Brad Reynard said. “I remember, definitely, her senior season being so selfless. She did not worry about playing shortstop. I will always be indebted to Becky Gruber.”