Former OPRF guard Erick Locke plans to attend prep school for a year before making a commitment to college. 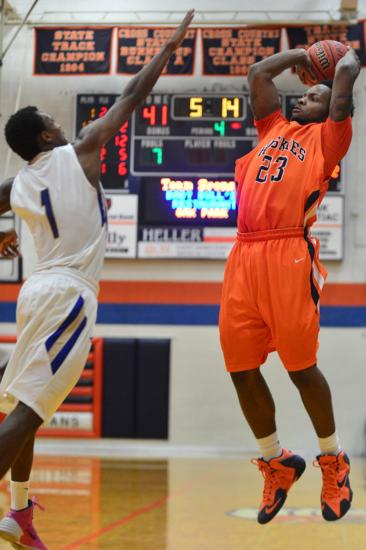 For the second time in three years, a former Oak Park-River Forest standout is taking the prep school route in hopes of landing a Division I boys basketball scholarship.

The Spire staff contacted Locke after seeing him play in a showcase tournament May 1 for top unsigned high school and junior college players. He visited the campus two weeks ago.

“[Spire] had their contacts there. They reached out to my family and I was highly interested,” Locke, who played for the Illinois Wolves, said. “We went down for visit and took a tour.”

Locke will follow the route of former OPRF center Gabe Levin, who graduated from OPRF in 2012 and attended St. Thomas More (Connecticut) prep school for a year. The 6-7 forward re-opened his recruitment and played for Loyola-Marymount last season.

He then transferred to Marquette June 17.

“I really didn’t expect Spire to reach out. I didn’t know them very much at first, but then I talked to their coaches,” Locke said.

He plans to continue his training and conditioning this summer. In previous summers he would try to recover from minor injuries while participating in June high school shootouts and July AAU tournaments.

“I’m hoping to get my conditioning up and get my body back [in shape],” Locke said. “I want to get stronger, faster and more explosive.”