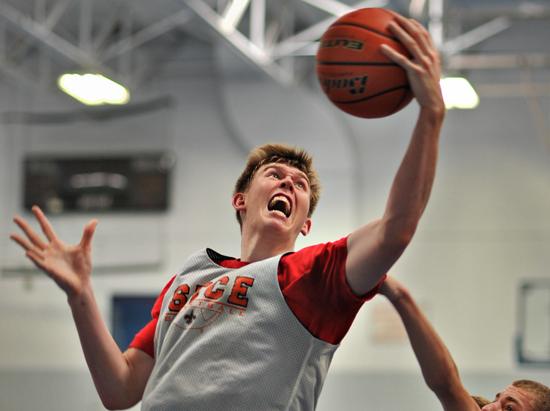 “That was only our second loss all summer,” Saints coach Patrick Woods said. “We haven’t lost at Geneva (summer league), and overall it’s been a time when we’ve come together as a team really fast and put in the work we needed to.”

The Saints’ only previous loss came to Oak Park in Ridgewood’s tournament. They had won five straight in the West Aurora tourney before suffering the loss. They even came from nine down to lead late in the ballgame before falling 52-50 to Rock Island.

“We didn’t have a couple of our players here, either,” Woods said. “Mick Vyzral is a big part of our team and we don’t have one of our three-point threats, Jake Asquini.”

The fact the Saints are leading the Geneva summer league is a bit surprising because Geneva was expected to be the dominant team, led by returning guard Nate Navigato. Also, it seemed the Saints would be looking for some leadership after guard Dom Adduci graduated.

The Saints have a good nucleus returning, including Asquini, guard Cole Gentry, Vyzral, Jake Clodi, James McQuillan and Cam Miller. It seemed they might be lacking height after center A.J. Washington graduated.

“Jack Bronec has stepped up his game inside,” Woods said of the 6-foot-8 senior. “We don’t have the dunks that we got from A.J., but we should get some solid play from our centers and guys inside.”

Huntley’s new coach Will Benson was only officially approved for his job as Marty Manning’s replacement by the school board last Thursday, but the next day was involved with coaching his team at the Hoops Mountain tourney. His hiring had been widely reported a few weeks earlier, but he couldn’t talk to media until it became official.

“I’m excited because my family and I had moved into the Huntley area about 3 1/2 years ago — to Lake In the Hills, although we’re in the Huntley school district — and it was always kind of a spot that was a dream scenario, a perfect scenario, where I could have a chance for a job,” he said. “I was fortunate enough to get the interview and be hired.

“Marty did a tremendous job of building up the program over the last eight, nine years.”

The Red Raiders, though, are in a rebuilding phase and showed it at the tourney with just one pool victory. They’ve been playing at Machesney Park Harlem’s summer league on Mondays, at the Harper summer league Tuesdays and Thursdays, and will also be at the Crystal Lake South Shootout.

Sophomore guard Jack Bessey and senior forward Connor Boesch are two of the few Red Raiders with varsity experience. Huntley’s sophomore and freshman classes are expected to be talented, and six sophomores were on the summer varsity tourney roster.

“Marty and I had very similar principles when it came to defense and physicality,” said Benson, the former Marengo coach. “The X’s and O’s on offense, probably like with anybody, will be some new things that the guys have to get used to.”

Marty Manning, himself, is starting over at Schaumburg.

A former Mid-Suburban League player himself, he relished the chance to go to that conference after taking Huntley to four straight conference titles.

However, the Saxons are depleted in height for the coming year — a rarity.

“Probably not much height coming up in the ranks, either,” Manning said.

The Saxons were defeated 38-33 by Hampshire at the West Aurora tourney in pool play Friday.

“We’re without one our better players (Brendan Parker) because of an ankle injury,” Manning said.