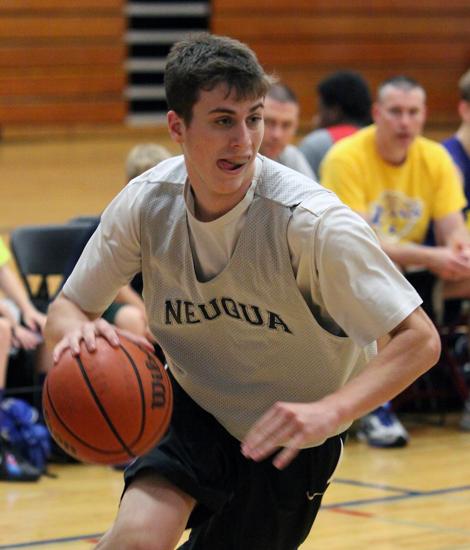 Fortunately, Wildcats coach Todd Sutton lets his team run and gun during the summer, and George was happy to be a part of it last weekend during the 10th Annual Hoop Mountain Summer Shootout at West Aurora.

“Coach let’s us get up and down and he likes the points in the off-season and summer,” George said. “So we tried to run and take open shots and enjoy playing with that freedom.”

George and Connor Raridon are the two starters who will return for the Wildcats later this winter as the team did lose Zach Incaudo, Josh Piotrowski and Elijah Robertson to graduation. Still, it was a far cry from the previous season when the Wildcats lost eight seniors from a 28-3 squad, but still were able to rebuild and win the Upstate Eight Valley Conference.

“We can see our potential,” George said. “We know we have work to do and we know what we can be. We’re looking to make a big run this season.”

“Connor and I are looking to lead this team and we remember that tough loss last year in the regional,” George said. “We want to win a regional this year.”

The Wildcats led Plainfield North by 13 points with just five minutes remaining in a Class 4A West Aurora Regional Semifinal, but the Tigers rallied for a 48-46 victory.

“We had a rough game and didn’t play like we were capable of, but we learned from it,” George said. “We know that once we have the lead we have to keep the foot on the pedal.”

The foot was on the pedal all weekend for the Wildcats, who reached 80 points in one game, which is impressive since the tournament rules were played with two, 20-minute halves and a running clock.

The Wildcats only had six players with them on Saturday, including sophomore newcomer Alex Filo.

“Lots of basketball in the summer and it’s been great for me to learn from the older guys, they’ve helped me a lot,” Filo said. “I’m playing against guys who are bigger and faster than I’m used to.”

Sutton called last season’s team the most inexperienced one during his tenure. At least this winter, he’ll have two returning starters.

“We’ve got a lot of experience returning,” Sutton said. “It was a fun experience and we got some great exercise. We played guys who weren’t even on the team last year so it gave a lot of people opportunities.”