Dave Trautwein remembers the biggest check he ever cashed as a professional baseball player. 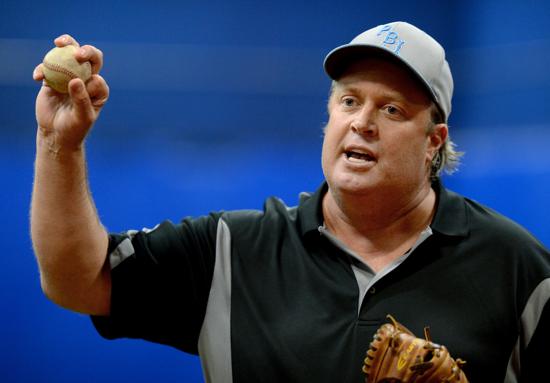 Dave Trautwein is the owner of the Professional Baseball Instruction of Illinois facility in Lake Barrington. Trautwein was also a 1987 draft pick of the New York Mets. | Brian O’Mahoney/for Sun-Times Media

LAKE BARRINGTON — Dave Trautwein remembers the biggest check he ever cashed as a professional baseball player.

Baseball has never been about fortune and fame for the 48-year-old Trautwein. Rather, it has been about the struggle.

A 1984 Barrington High School graduate, Trautwein went on to play at the University of North Carolina before being drafted by the New York Mets in the 22nd round of the MLB amateur draft in 1987. Trautwein, a 6-foot-5 right-handed pitcher, was not a hard thrower, reliant instead on command and a rubber arm.

“I didn’t fall out of bed throwing 95 [mph]. I hit 93 three times a summer,” Trautwein said. “I threw a hard slider and a sinking fastball. My biggest asset was I was pretty nasty three days in a row.”

After three years toiling in the minor leagues, Trautwein got his big break while with the Mets during spring training in 1990. Named to the team’s 40-man expanded major league roster, Trautwein was on the fast track to the big leagues. He roamed the Mets spring training site in Port St. Lucie, Florida, with the likes of Dwight Gooden, David Cone, Frank Viola and John Franco. He struck out Cal Ripken during an exhibition game in Miami.

But during a labor dispute that spring — the owner’s locked out the players — Trautwein’s arm began to hurt. When baseball resumed and camp broke in April, he did not make the 25-man roster. He spent the season at Triple A Tidewater, then was demoted to Double A in 1991.

“I went from serious prospect to suspect in a year and a half,” Trautwein said. “They gave me chance after chance, but it was over.”

He retired after the 1992 season. Armed with a degree from North Carolina, Trautwein entered the real world of day jobs and mortgages. For almost a decade he worked a sales job, selling toxic gas detection systems to chemists and engineers.

“I’m not either one of those. It was pretty intense,” Trautwein said.

Married with a young family, Trautwein had every reason to remain an employee. But baseball was always at the top of his mind. During six years of pro ball, he had been coached by 288-game winner Tommy John and current Pirates manager Clint Hurdle. At Barrington, he had played for Kirby Smith. Each man endowed upon him the sport’s most valued heirloom: knowledge.

“I was exposed to the best of the best,” Trautwein said. “The guys that have played it more and been around good teachers know how to teach it.”

In 2002, Trautwein started giving pitching lessons in the backyard of neighborhood houses around Barrington. As word of mouth spread, he needed his own space, so he rented a facility near the Barrington Ice Arena.

Eventually, Trautwein bid adieu to the cubicle life and started his own business, Professional Baseball Instruction of Illinois, located in Lake Barrington.

Each day, he’s exposed to the sounds of baseball; the sizzle of a four-seam fastball as it whips through the air, the pop of that same fastball when it’s squeezed by a catcher’s leather mitt, that unmistakable crack when a hitter makes contact.

He rarely thinks about the major league career he never had. No, Dave Trautwein is right where he wants to be, teaching the game.

“I have no regrets. I had the chance of the lifetime in New York,” Trautwein said. “This place [Professional Baseball Instruction] is my life. I’m fighting every day to make it work.”