The summer 7-on-7 format, which takes linemen and running backs out of the equation, just doesn't play to Glenbard West's strengths. 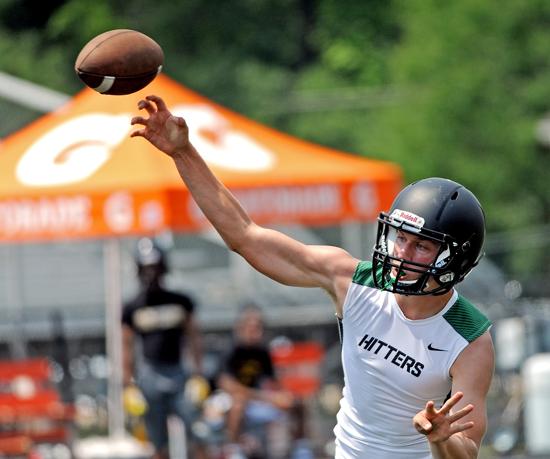 Glenbard West is one of the state's premier programs with a 70-7 record since 2008.

But it's not because coach Chad Hetlet believes in slinging the ball all over the field.

The summer 7-on-7 format, which takes linemen and running backs out of the equation, just doesn't play to Glenbard West's strengths.

"We've got to do what we do," Hetlet said after the Red Grange 7-on-7 at Wheaton Warrenville South on Friday. "We've got to be physical and block and run the ball, stop the run on defense. I don't know if we're good at that. We'll see."

But what became apparent during the two days of the Red Grange is that, for a running team, the Hitters can throw the ball pretty well.

They went 6-0 in bracket play Friday for the 32-team, double-elimination tourney, beating Neuqua Valley 22-14 in the final. Neuqua, whose only two losses of the day were to Glenbard West, beat third-place Maine South 32-22 to earn the rematch with the Hitters.

The stars for Glenbard were quarterback Kyle Kramer and receiver Aidan Gould.

"Everyone knows us as a running team, so being able to pass very well is a confidence boost," Kramer said.

"Coach (John) Sigmund made some great play calls. He made some calls I'm comfortable with and those were the calls that we made all day. Our wide receivers ran great routes and always seemed to be open. Aidan Gould had an amazing day. So it wasn't just all on me."

The title qualified the Hitters for the National 7-on-7 Select Tournament July 17-19 in Hoover, Alabama. It's not a trip Hetlet was figuring to make this summer.

"I wouldn't have expected we'd have won this with all these teams here," he said.
"The kids played really well. Aidan did an unbelievable job the last two days. Kyle Kramer looked like the best quarterback here, I thought."

Neuqua Valley had a productive tournament from returning quarterback Broc Rutter. "Young group, but I'm really excited about it," Wildcats coach Bill Ellinghaus said. "Broc being a two-year starter has really helped us."