From role-playing sophomore to junior star to a Division I player, versatile, fast-rising forward finds fit with Redbirds. 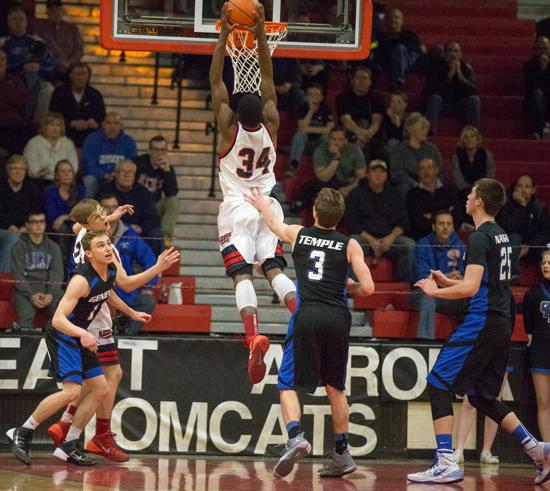 West Aurora's Roland Griffin (34) goes up for a slam against Geneva's Pace Temple (3) in the Class 4A East Aurora Sectional at East Aurora High School in Aurora, IL on Wednesday, March 12, 2014 | Sean King / For Sun-Times Media

How far and quickly has West Aurora’s Roland Griffin come?

As a sophomore he played a valuable role off the bench for legendary coach Gordie Kerkman for a sectional championship team.

Just nine months later as a 6-5 junior he was a budding, yet overlooked star, averaging 15.5 points and 8 rebounds a game this past season.

Now Griffin is an Illinois State Redbird as the up-and-coming forward committed to head coach Dan Muller on Sunday morning, months before the start of his senior season.

Griffin says he felt a “genuine interest and want” from Muller and the Illinois State coaching staff, which stood out to him through the recruiting process.

“They really wanted me, and I could see and feel that,” says Griffin, who had been leaning towards committing to the Redbirds since he visited the ISU campus in early June. “They are good people and a great coaching staff.”

Griffin, one of the top prospects in the Class of 2015 in Illinois, chose Illinois State over offers from George Washington, Northern Illinois and a growing list of suitors, particularly in the Missouri Valley Conference.

“The timing was right for me,” says Griffin of his commitment to ISU. “It’s a good school with strong academics. They have a good fan base and strong overall tradition with Doug Collins having played there and their basketball program.”

With long arms, a solid frame and the potential of what his body will grow into, Griffin has emerged as a more versatile threat over the past year. He combines strength, power and a budding skill set as a combo forward, capable of getting things done around the basket and facing up on the perimeter. He is able to step away and knock a perimeter shot down with an improving jumper, while surprising you with a strong burst to the basket off the dribble in the halfcourt.

With the all-important July evaluation period looming for high school prospects, where players will showcase their abilities in front of college coaches for three consecutive weekends, Griffin was at a crossroads. He suffered a toe injury this spring that he battled and played through. He sat out all of June but doctors just recently told him he needed three more weeks of recovery time from a small hairline fracture in his toe, which could erase all of the July AAA circuit for him.

Now Griffin can focus on getting healthy and preparing for his senior year as an Illinois State recruit.

“The injury didn’t really factor into my decision at all, but I am relieved it’s over,” says Griffin of the recruiting process. “It [recruiting] wasn’t overwhelming, but the calls were getting to be a lot, and I just knew where I wanted to go.”

Loyola Ramblers offer Robbie Avila of Oak Forest, a skilled 6-8 big man and one of the top 10 prospects in the Class of 2022.

Are all offers legit? "I told a family to take it, to take the offer from the high-major right there on the spot… https://t.co/sOVVwRKinI

Are all scholarship offers the same? Are they all legit and genuine? Can every prospect who receives one commit on… https://t.co/TblpPDyaCh

One of the country’s top 30 prospects and the No. 2 prospect in Illinois commits to #Kentucky. Fenwick’s Bryce Hop… https://t.co/SYNH7Nkbha

RT @michaelsobrien: JUST IN: Fenwick senior Bryce Hopkins commits to Kentucky. “When they offered it was a bit of a dream come true. As a…