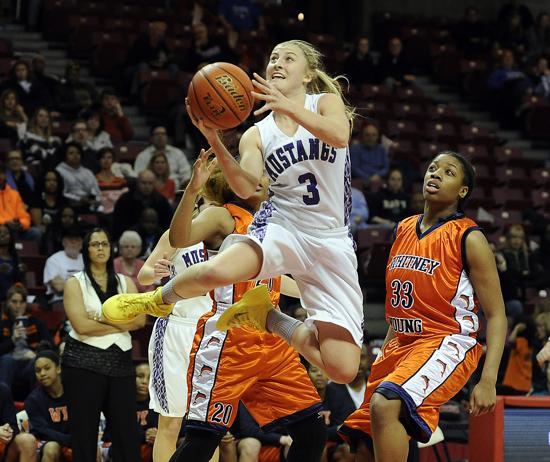 Rolling Meadows Jackie Kemph flys through the air past the defense of Chicago (Whitney Young) to score in the first half of the Class 4A girls basketball championship finals game in Normal on Saturday. | AP Photo/ Mark Welsh

The author obviously has never seen Jackie Kemph and her teammates play basketball.

Kemph, a 5-6 senior point guard, used her speed and ballhandling ability to ignite an explosive, fast-paced offense that enabled Rolling Meadows to reach the Class 4A state championship game for the second straight year.

Kemph averaged 20.6 points, 8.2 assists and two steals to lead the Mustangs to a 29-5 record. She finished her career with a school-record 2,149 points, was named the Mid-Suburban East Player of the Year for the third time and finished second in the Illinois Ms. Basketball voting.

In addition, Kemph and her doubles partner, twin sister Allie, qualified for the state tennis finals for the third straight season, finishing in the top 24. The National Honor Society member did that while maintaining a 5.3 GPA.

For those efforts, Kemph is the Sun-Times Female Athlete of the Year.

“We had a tremendous amount of talent but she was really the driving force,” Rolling Meadows coach Ryan Kirkorsky said. “What sets her apart is her competitiveness.”

That quality has been evident since Kemph and many of her teammates started playing together in grade school. On a team with three Division I recruits, Kemph was the leader who fueled the squad’s desire.

“I don’t really care about sports as much as she does,” said Allie Kemph, who was a reserve guard. “She had a lot more competitiveness. She has so much energy and she really wants to win, even in practice.”

But Kemph was a benevolent leader.

“For basketball she always motivates you,” Allie said. “She never gets down on you even if you mess up.”

The twins overcame an interesting dichotomy. They were equals on the tennis court yet Jackie overshadowed Allie in basketball. But there were no hard feelings

“Tennis was fun,” Allie said. “We could yell at each other without it being offensive, and that made it fun.”

“Allie is an incredible athlete and she handled it really well,” Jackie Kemph said. “She understood her role and knew it was important to be that sixth man.

“We all knew that we couldn’t have gotten to state without every single player doing their job, whether it was in games or working hard at practice.”

The Mustangs had won just one regional title before Kemph arrived with lofty goals and the work ethic to achieve them.

“After the season I said to her how amazing it is to go Downstate and do it twice and she said she always knew she was going Downstate,” Kirkorsky said. “I asked her, ‘when did you know that?’ Her response was, ‘fourth grade.’ Her confidence and skill is just amazing.”

Few people thought Kemph could top her junior season in which she was named the Gatorade Illinois Player of the Year. But her numbers improved slightly and the Mustangs proved their runner-up finish in 2013 was no fluke by returning to the title game, where they lost to Young.

So ended an era that won’t soon be forgotten in Rolling Meadows. Kemph and forward Jenny Vliet will continue their careers at Saint Louis, where Allie and another teammate, Katie Shewmon, also are enrolled.

“We wanted to be successful for our high school and our community,” Jackie Kemph said. “Rolling Meadows is a great community and they backed us the whole way. We worked really hard to have people know who we are and we wanted to make a name for ourselves. I think we did that.”