Next up is likely to be incoming freshman Cameron Donatlan. 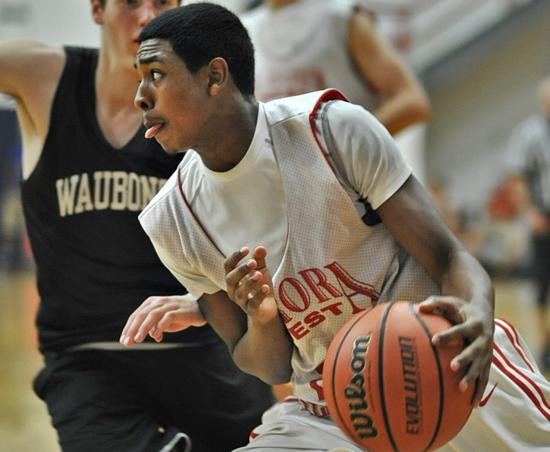 Like most schools, the line of four-year varsity basketball players at West Aurora High School isn’t long, but it could continue to grow.

Coach Gordie Kerkman has had five such players in his 38-year tenure and they’re among the top nine on the school’s career scoring list.

The latest, of course, is 2014 graduate Jontrell Walker. The Blackhawks’ career scoring leader with 1,772 points, Walker is moving on to play NCAA Division I basketball at the University of the Incarnate Word in San Antonio.

Next up is likely to be incoming freshman Cameron Donatlan.

A 6-foot wing, Donatlan was one of three freshmen listed on the team’s roster for the Hoops Mountain Summer Shootout.

“We had four freshmen up with us earlier in the summer but he’s probably the only one who will be with the varsity all season,” Kerkman said.

Durrell Williams and Damien Virgin also were on board at Hoops Mountain.

“We were sorta short, but I think (Donatlan) can play with us. He’s pretty skilled. He’s got a pretty good natural kind of knack for the game.

“Obviously, there’s teaching points and we have to remember that and be patient with him. He’s got good basketball IQ and just seems to be a natural when he gets out in the open floor with the ball. He knows what to do with it, where to pass, when to shoot or where to take it himself.”

“(Donatlan) is good. He’s just got to work on his right hand,” Dunn said of the natural lefty.

A quartet of experienced guards figures to be the strength of coach Dan McGuire’s Yorkville team in the coming season, but the Foxes will be vertically challenged.

Kyle Shimp, a 6-foot-6 all-conference performer who averaged nearly 10 points and five rebounds, isn’t planning to come out. A pitcher with a scholarship offer from Iowa, he has decided to focus on baseball.

“I think we’re gonna have some good perimeter pieces,” McGuire said after his team pasted York at Hoops Mountain. “We’ve had a lot of kids up now for their third year and you can really see we kind of think similarly now.”

“We’re gonna have to look for somebody with size to step up,” said McGuire, whose tallest player is 6-4 junior Jake Schutt. Other candidates include sophomores Deandre Manuel (6-3) and Austin Avery (6-2) and junior Daniel Kaczmarek (6-3).

“This is one of the toughest (summer) schedules we’ve played and that should help us in the long run,” McGuire said.

Continued conference shifts got you confused? Join the club.

The addition of West Aurora and Glenbard East allows for two eight-team divisions in the Upstate Eight for the coming school year.

Both will join the UEC Valley, which also will include Bartlett, East Aurora, Metea Valley, Neuqua Valley, South Elgin and Waubonsie Valley.

The divisions will change again, though, the following year. That’s when District 204 schools Metea, Neuqua and Waubonsie Valley depart for the DuPage Valley Conference, boosting it back to nine teams.