Another Southland prospect is headed to Indiana to play his college ball. 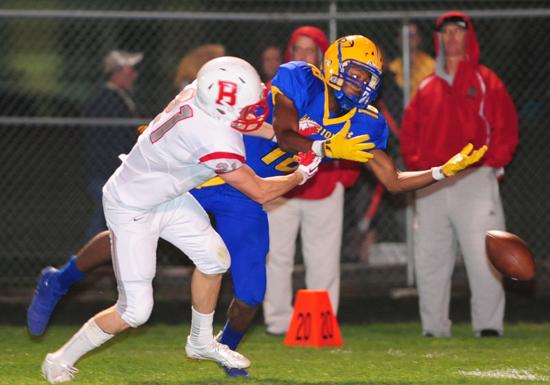 Omari Stringer fouled as he goes for an interception, but no penalty goes to Benet's #21 Ryan Parks. | John Booz/for the Sun-Times Media

Another Southland prospect is headed to Indiana to play his college ball.

Crete-Monee senior linebacker Omari Stringer, a 6-foot-3, 210-pounder, is headed to Indiana after a recent visit and confirmation of an offer from the Hoosiers.

“It’s close to home — it’s only three hours away,” Stringer said. “And I feel like coach (Kevin) Wilson is just really wise and honest, and you can’t beat that. He has never hid the truth from me.”

Stringer saw his recruitment take off after a spring evaluation period during which he added offers from Indiana, Northern Illinois, Wisconsin, Missouri and Connecticut.

“I am just really comfortable with the coaches,” Stringer said. “I see them as more than coaches, they are mentors. They are more than football coaches, they change people’s lives. My parents also love Indiana.”

“My dream is coming along. The puzzle pieces are coming together,” Stringer said. “I have a great relationship with Tommy Mister, Simmie Cobbs, and a couple of more guys from Chicago. But just hearing their perspectives, and that we all speak the same language. I am just ecstatic about what is ahead.”

Stringer is quick to realize the opportunity that his recruiting process has given him and is looking forward to his football future.

“I am just excited, period, to play at the next level and have my game evaluated. For a ton of guys, this is the end, but not for me,” Stringer said. “I have more of a journey; I feel I have to make the most of it. What happens in the next 4-5 years of my life sets the tone for the rest of my life. I am excited.”

The Big Ten is a conference Stringer has had his eyes on for a while.

“I feel like it is one of the best conference in college football, along with the SEC,” Stringer said. “I knew I wanted to go to Indiana before I even stepped on campus and before I had any other offers.”

Providence senior tight end Nate Vejvoda will head to play college football at Miami (Ohio), a school that has been near the top of his list since it offered him in the spring.

“The academics are really good, which was an important part of my decision,” Vejvoda said. “The coaches there also believed in me being a big-time player, especially in their offense.

“Its definitely a relief to have picked a school. I don’t have to worry about trying to find when to visit, whose camps to go to or who to call anymore.”

Bolingbrook continues to churn out Division I talent in its upcoming senior class, including defensive back Armani McNulty, who has received five offers, coming from Ball State, Eastern Michigan, Central Michigan, North Dakota State and Buffalo.

“The first offer was great,” McNulty said. “It was real exciting when I got my first offer from Central Michigan. I had seen my teammates get offers before me and it was intimidating at first because I wasn’t sure if I would get one. But I stayed patient and then one came in, then two then three. But I want more, I’m working hard.”

The Scout.com three-star prospect is athletic and long, measures in at 6-foot, 175 pounds and has his goals set for the upcoming season.

“Right now I just need to keep working hard. We have a great defensive backs coach in Todd Howard,” McNulty said. “He puts us in a great position to make plays. I am trying to just tighten up my defensive back skills. Hopefully, I can make a big impact on this 2014 (Bolingbrook) team.”