Jawill Aldridge and Marist ready to step up

Marist coach Pat Dunne knows he lost a lot of stars from last season’s squad, but he believes he has another one in Jawill Aldridge. 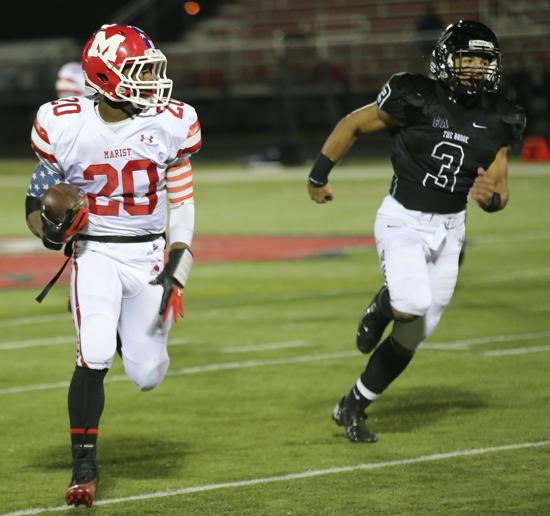 After his team graduated nearly its entire starting offense from last season’s Class 8A state semifinalist — and star receiver Flynn Nagel transferred to Lemont — Marist senior running back Jawill Aldridge knows he’ll be in the spotlight this fall.

“I do feel like there’s a burden on me,” he said. “With so many players leaving and with Flynn transferring, there’s a lot of weight on my shoulders. I’m going to have to step up and be a leader.

“I’m really excited to step in there. I know I can do it. I just want to show that I can take Marist far.”

Marist coach Pat Dunne knows he lost a lot of stars from last season’s squad, but he believes he has another one in Aldridge.

“He is a guy who brings a lot on both sides of the ball and special teams,” Dunne said. “He brings a new dimension running the ball. Last year, Peter (Andreotti) did a great job, but we know Jawil is another guy who can do big things. He’s having a good offseason.”

Aldridge made his mark throughout last season as a playmaking safety and kick returner. His role in the offense greatly increased late in the year. He ran for 145 yards and three touchdowns in a playoff win over Plainfield South.

The RedHawks, who had their 2013 season end with a heartbreaking 27-21 semifinal loss to Naperville Central, will look to Aldridge for performances like that on a regular basis to help make up for the losses of Andreotti (1,411 rushing yards, 17 TDs last season), Nagel (1,488 receiving yards, 18 TDs) and Nic Weishar (1,044 receiving yards, 10 TDs).

“All three guys are out competing and getting reps,” Dunne said. “We’re looking forward to competition throughout the summer.”

Competition is the name of the game this summer for Marist, which goes into the 7-on-7 passing tournament circuit with a lot of decisions still to be made.

“We’ve got one guy returning and a lot of spots to fill,” Dunne said at the Richards 7-on-7 Passing Tournament. “That’s the great thing about competition. You can’t teach experience. The more reps these guys get and the more opportunities to play against other people, the better. That’s the best thing about the summer and these passing tournaments in particular.”

Aldridge knows many people will be counting out the RedHawks this season. That’s surely a motivator.

“We’re really hungry,” he said. “We have a lot of young guys who haven’t played much on varsity. We want to come out and prove some people wrong.”