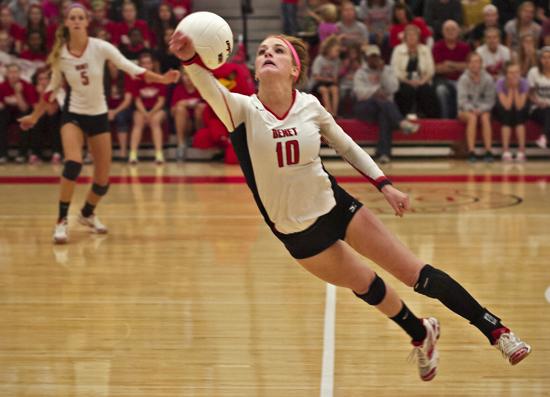 A few days removed from competing at the AAU National Championships in Orlando and a few days ahead of beginning a five-week summer school session at Wake Forest, you would think Chicago Sun-Times All-Area libero Caroline Wolf would be taking it easy.

Not this 5-foot-8 defensive dynamo. Wolf was serving as a camp counselor at her alma mater, Benet, helping to groom girls who hope they, too, can someday be part of a state championship high school team and a national championship club team.

“It was amazing,” Wolf said. “I felt very blessed to be put on that team. Playing with girls at such a high level – everyone on my team except one are going to play in the Big Ten – and playing against it every single weekend just raises your game.

“I feel very prepared for college now. I have no worries. I’m very excited for the next level. Winning a national championship was a very good experience and something I will remember forever.”

As a senior last fall, Wolf had more than 425 digs and was named the MVP of the Benet Invite and the Wheaton Classic. She was an all-tournament selection at Glenbard East’s Autumnfest and a first team Sun-Times All-Area choice.

But none of that could prepare her and her teammates to play the Brazilian junior national team in an exhibition match following SPVB 18 Elite’s national title. Brazil defeated the girls from the western suburbs, 20-25, 29-27, 15-11.

“They (Brazil) were very good,” she said. “They were very physical, very strong, very lean. Playing against them was amazing. They all could touch like 11 feet.”

Despite the loss, SPVB 18 Elite was also able to generate some international goodwill.

“We played against them (Brazil) the entire week before nationals,” Wolf said. “We went to dinner with them, we got to know them, and the entire week at nationals we’d see them and they be like, ‘Oh, you’re our best friends.’

“So when we won the national championship and played them it was really fun. Afterward, they came up and gave us hugs, we traded gear with them, we each got a warm-up jacket. It was a really good experience.”

Now Wolf is preparing for life after high school and club, where they take their volleyball and athletics in general even more seriously.

“We have to go through five weeks of summer school so we can take less credits during the season,” Wolf said. “We’ll do some lifting and running to stay in shape during summer school.  Then we’ll start doing doubles and some really hard lifting during preseason.”

Wolf will take two courses at Wake Forest this summer, a Sociology course and Psychology 100 –“Learning to Learn,” the latter designed to help students improve their academic skills through the application of basic principles of learning.

“I want to go into business with a minor in psychology or sports communication,” she said. “We’ll see. I don’t have to decide until sophomore year. I’ve always been into people stuff, that’s why I’m taking sociology. We’ll see how it goes.”

For those who didn’t make it out to North Avenue Beach over the weekend for the Junior Players Beach Volleyball Series, teams can register or fans can just make plans to watch the next tournament on Sunday, July 27. The event has four divisions for boys and girls – 12U, 14U, 16U and 18U.

All teams are guaranteed at least three pool play matches with the top teams advancing to the playoffs. Winners receive medals, sponsored gear and championship fleeces.

For more information, go to https://luauvolleyball.leaguelab.com/page/juniors.

Addison Trail is looking for a boys volleyball coach beginning with the Spring 2015 season.

Former head coach coach Tom Huber stepped down early in the 2014 season for personal reasons, and assistant coach Chad Grant, who also serves as head girls volleyball coach at Glenbard South, took over for the rest of the spring.

Elgin Academy is searching for a girls varsity volleyball coach for the 2014 season. The school is seeking someone with four years of coaching and/or playing experience, a proven record of program development and a passion to work with high school students.

Benedictine University will host a Summer Volleyball Camp for boys and girls ages 7-13 from 9 a.m.-4 p.m. on Wednesday-Friday, July 20-August 1. The cost is $175 and includes lunch and a T-shirt.