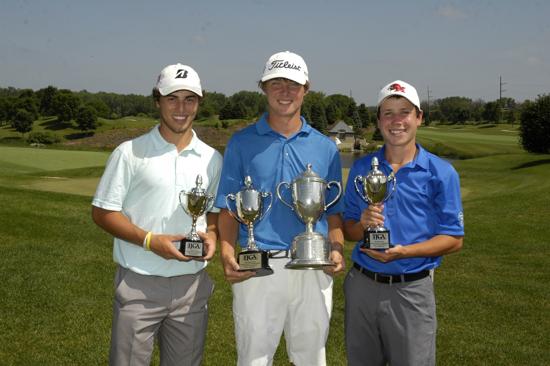 He became the first golfer in tournament history to win back-to-back championships June 26 at Makray Memorial Golf Club in Barrington.

O’Reilly clinched the win with an 18-foot birdie putt on the par-5 18th hole. After his 4-iron shot from the rough landed in a right-side sand trap, he put himself in a position to win with a remarkable save.

“My bunker [shots were] feeling pretty good,” O’Reilly said. “It was a tough shot, but I wanted to give myself a chance. I knew I was putting well on the greens all week.”

O’Reilly (68-72-72—212) could play aggressively after revamping his putting with his swing coach, Mike Carbaray of Butterfield Country Club.

His winning birdie on No. 18 came one day after he made a 20-foot birdie putt on the same hole during the second round. He opened the  tournament with three consecutive birdies.

O’Reilly, who finished tied for 11th at the IHSA Class 3A state meet in November, won his second tournament of the summer. He also captured the Medinah Country Shrine Junior Invitational May 13 with an even-par 72 at the famed No. 3 course.

Three of his next tournaments are outside the Chicago area. He is set to return to the Callaway Junior World Golf Championship July 14-18 in San Diego. He then plans to compete in AJGA events in Bloomfield Hills, Michigan, and London, Ontario, in August.

On Monday, O’Reilly was back on the course playing at the 36-hole U.S. Junior Amateur qualifier at Schaumburg Golf Club.

He and Hinsdale Central teammates Brian Dolehide and Kenneth Li, along with Lyons junior Jon Hudson, were attempting to claim one of the four berths for the finals July 21-26 at The Woodlands, Texas.

Jon Hudson said he wanted to play in the same pairing as his brother at Makray, but was placed the group ahead of him during the final round.

“The biggest highlight of the tournament was making three birdies in a row and dropping a 30-foot birdie putt from the fringe on 14,” Jon Hudson said. “I then went to 15 and stuck a wedge to four feet and made my third birdie.”

Daniel Hudson flew to Kansas Sunday night to attend freshman orientation and had to skip Monday’s qualifier. He will play in the Trans-Mississippi Championship starting July 7 in Tulsa, Oklahoma; the American Junior Golf Association Midwest Junior Players July 14-17 at Mistwood in Romeoville; and at the Illinois Open beginning July 21 at the Glen Club.

“It was definitely fun seeing both [Hudson] names at the top of the leaderboard,” Daniel Hudson said about Makray. “Obviously, it would have been nice to see one of them above the rest but inside the top six was nice to see.”