Members of Schrobilgen clan who are avid runners have spread the word to their friends about Relay Iowa Run for Shelter. 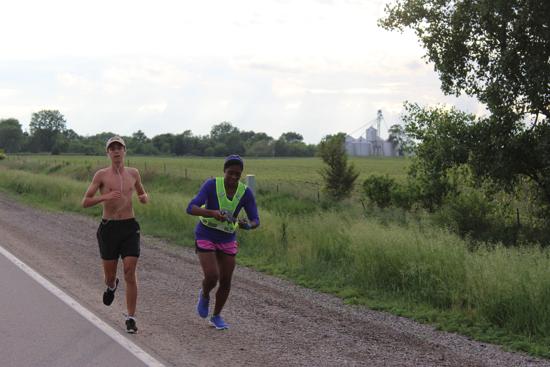 Tim Huettel and Cori Conley helped the Whippersnappers become the first of the three Oak Park teams to reach the finish of the 339-mile run. | GREG SCHROBILGEN

Running across Iowa has become a family tradition in the Schrobilgen household.

Recent Oak Park-River Forest graduate Erin Schrobilgen and her father, Greg, participated in their third consecutive Relay Iowa Run for Shelter. The fifth annual event from June 6-8 was a 24-hour relay featuring nearly 30 teams, each with no more than 13 runners. The 339-mile course spans west to east, from Sioux City to Dubuque.

Team members endure limited sleep during the relay and each runner puts in about six miles before being replaced by a teammate.

“You run through the night with a headlamp,” Greg Schrobilgen said. “On Sunday morning, the end of my shift was past the Field of Dreams [in Dyersville].”

Erin Schrobilgen, a former cross country runner and soccer player with the Huskies, formed her own running group for the first time with her mother, Kathleen, one of the three drivers for the team van. Erin’s older brother Malachy Schrobilgen and younger brother Rory worked for the relay organizing committee and manned checkpoints. They also posted signs to guide runners.

Relay Iowa benefits Restoring Hope International, which runs an orphanage in Welkom, South Africa, for children orphaned by AIDS. The home was started by an Iowa couple, according to the relay website. 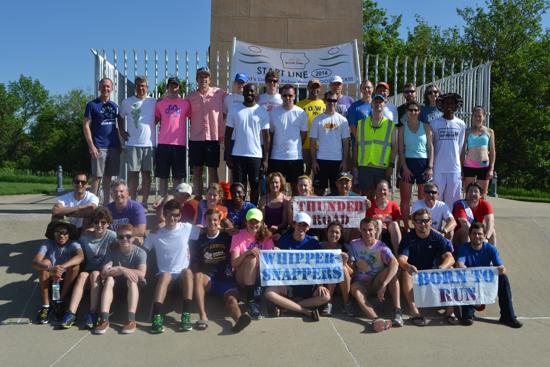 The 38 runners from the three Oak Park teams gather for a group photo after reaching Dubuque, Iowa. | GREG SCHROBILGEN

Three of the 29 teams in this year’s relay had Oak Park connections. Erin Schrobilgen’s entry, the Whippersnappers, included only recent graduates of OPRF, along with Mark Hodes and John Filosa as additional van drivers.

“There is not a whole lot to it,” said Erin Schrobilgen, who will plans to run cross country at Lawrence University. “We got everyone together. We got the message out to everyone at the end of last year that I thought would be interested.

“A lot of my friends are runners, so I began with those [on the team]. If they were not a runner, they are usually athletic.”

This season, Born to Run returned and family friend John Resek was the captain of another Oak Park Sprinsteen-tribute team, Thunder Road.

“Our team featured a lot of friends from Oak Park that we have known for years,” Greg Schrobilgen said. “Three of our friends were from Milwaukee and we had three from Maryland, including my wife’s sister.”