Next stop for Guerin grad Desiree Irizarry is Akron softball 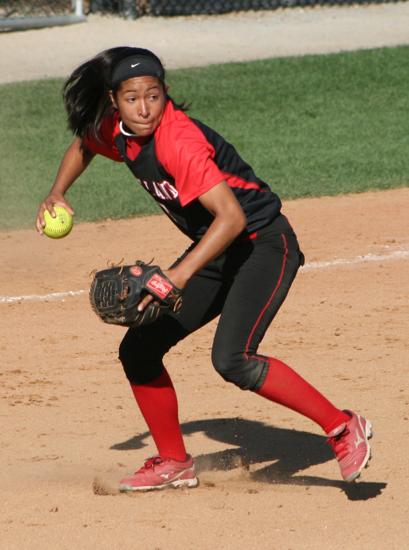 After an impressive two-sport stint at Lake Land College in Mattoon, Guerin alumna Desiree Irizarry is ready to move on to the next level.

Irizarry, who lives in Chicago and graduated from Guerin in 2011, has committed to play Division I softball at Akron.

“She was one of the best two-strike, bunt-for-a-hit players I’ve ever had,” said Lake Land softball coach Nic Nelson. “She’s a great athlete and was really fun to be around.”

Irizarry batted .394 with 27 RBI and 38 runs in 37 games for the Lakers this spring and was named to the all-tournament team for Region 24.

The second baseman was recruited by Division I softball teams after her first year at Lake Land in the spring of 2012. But Irizarry made a surprising switch, deciding to play basketball for two seasons.

“I didn’t plan on playing basketball when I went there,” Irizarry said. “I was playing both sports since I was 3 years old and it was hard to give one up. I love both sports very much.”

Despite averaging 11 points and six rebounds this year, Irizarry decided to go back to softball.

“It’s tough to think about having to let it go, but sometimes you have to grow up and think about what’s best for you and your family,” she said. “Basically, it came down financially to which sport and school would help me and my family the most. Softball ended up giving me a good ride.”

Lake Land has had 22 players go on to play Division I softball in the last four years. The school’s ability to send girls to the next level was one of the main reasons Irizarry went there. Nelson was another big selling point.

“Honestly, playing for coach Nelson, not only did he help me grow as an athlete but as an individual,” she said. “I definitely came a long way from my first year until now. Now I know what needs to be done to successful.”

Irizarry had several offers to continue her softball career, including Kennesaw State and Tiffin University, but in the end she couldn’t pass on Akron.

“Akron showed a lot of interest right off the bat and when you get a coach [Julie Jones] that shows interest right away, it shows you that they really want you,” Irizarry said. “They flew me out right away and the coach didn’t just recruit me to fill a spot, she wanted to help in my career. I felt that was a place I needed to be. She was a coach that would help me not only on the field but in my life as well.”

Irizarry, who earned an associate’s degree at Lake Land, plans to study psychology and organizational supervision.

On the field, Irizarry isn’t sure what position she’ll play for the Zips, who went 27-16 this season. She played shortstop in her four years on varsity at Guerin and second base for Lake Land, but feels comfortable anywhere on the field.

“I’ll go out there and play wherever they need me,” she said. “I’m just really excited. [Playing Division I] was something that I dreamed about since I was young.”