Jamestown Jammers manager Brian Esposito has been impressed with Ross’ defensive work at first, saying he’s “a really good first baseman, especially digging balls [out of the dirt] and supporting the infielders.” 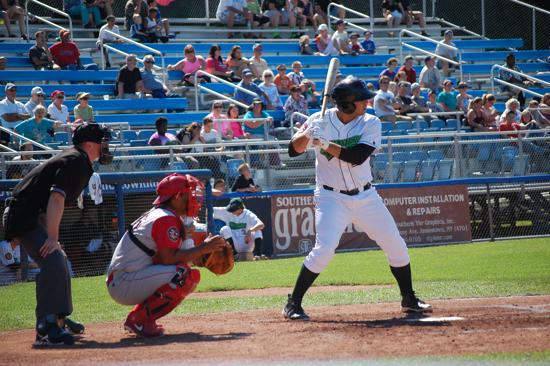 Niles West alumnus Kevin Ross is batting .233 in 10 games with the Jamestown Jammers, a Class A affiliate of the Pittsburgh Pirates, this season. | Stan Zoller/for Sun-Times Media

JAMESTOWN, N.Y. — Russell E. Diethrick Jr. Park in this struggling industrial city in western New York is not the field of dreams for Kevin Ross.

But it’s a stepping stone.

Ross, a 2012 Niles West graduate, plays for the Jamestown Jammers, a Class A affiliate of the Pittsburgh Pirates.

The Pirates selected Ross in the eighth round as a shortstop two years ago and he’s played every infield position during his first two seasons in the organization, but this year he’s played exclusively at first. It’s a move that did not surprise veteran Niles West baseball coach Gary Gustafson.

“I thought they might do that with the kind of frame he’s got,” Gustafson said of Ross, who is listed at 6-foot-1 and 205 pounds.

Gustafson said Ross has a “short, strong throwing arm” and he was clocked at 90 miles per hour on a throw from short to first during his high school career.

Jammers manager Brian Esposito said Ross has been working at both third and first base. Esposito has been impressed with Ross’ defensive work at first, saying he’s “a really good first baseman, especially digging balls [out of the dirt] and supporting the infielders.”

Ross said he has found first a bit easier than shortstop because “there’s not as much to do as there is at short.” The move to first was a matter of necessity.

“We were lacking a first baseman, so they moved me there,” he said.

In the 10 games he’s played, Ross is batting .233, but is hitting .316 with runners in scoring position. Ross is batting .189 against right-handed pitching, but .319 against lefties. Ross said one of his goals is to boost his average and to hit more “bombs” — home runs.

“He’s a tremendous hitter,” Gustafson said. “He’s in a class by himself. The ball makes a different sound off his bat.”

Ross said he has had to adjust to the pitching. Ross said he would see a pitcher throw 90-plus miles per hour occasionally at Niles West and in three years playing for the Chi-Town Cream, a traveling team made up of players from the Chicago area. Now, he said he sees such velocity daily.

Ross has had to make more than on-field adjustments. The Pirates organization is known for having a strict regimen in its minor league system. The daily routine that includes batting practice or strength conditioning along with shaving every day as beards are not allowed.

“We help these guys in growing,” Esposito said. “He’s doing well and adjusting to the standards we have. He knows what he needs to do.”

That is not a surprise to Gustafson.

“A lot of guys come and go; I’ve had a lot of good ball players,” Gustafson said. “Kevin is special guy ... a special player, there’s no question.