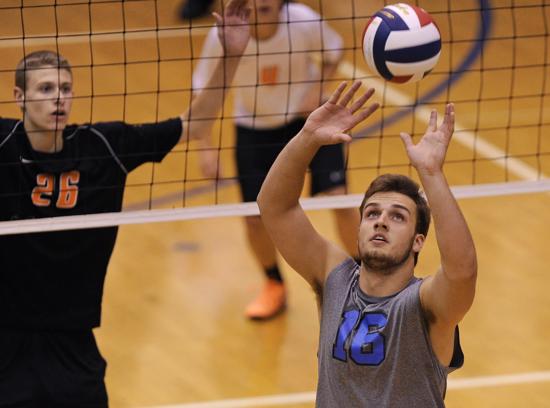 That’s all that separated Lincoln-Way East teammates and 2014 Sun-Times All-Area selections Austin Royer and Josh Phalen from claiming a national championship to go along with the IHSA state title they won in early June.

Spiral 18 UA of Chandler, Ariz., defeated Ultimate B18 Gold – which featured Royer, Phalen and other players from the far south suburbs – 21-25, 25-22, 17-15 to win the 18 Open division at the USAV National Championships last week in Houston, Texas.

“Yeah, it was tough,” Royer said. “We played so well all nationals. That (Arizona) team just kind of came out of nowhere.”

How tough was it? Ultimate B18 Gold led 9-3 in the third set before Spiral roared back.

“It was crazy,” Royer said. “All the momentum was on our side. We switched sides up 8-3 in the third game and we had this huge play where three guys were on the ground and somebody hit the ball and we got the point.

“We were all hyped up.  Momentum was on our side. Then things just started going wrong, one after another.”

Ultimate had a match point at 14-13, but was unable to hold off Spiral.

“I thought it’d be the coolest thing in the world to win both (a state title and a national title), but you can’t have everything,” Royer said.

The Sun-Times 2013 Player of the Year and two-time All-Area selection plans to relax during the next few weeks before embarking on the next phase of his career.

“It’s hard to stay away from volleyball during summer, especially with all the sand volleyball going on,” he said. “But I’m just going to relax, take a little break, play volleyball with friends just for fun. Nothing competitive. I think I’ll just end on a high note after nationals.”

Royer will continue his playing career at St. Ambrose University in Davenport, Iowa, where he will play for first-year coach and former Mother McAuley player Catherine Wildner.

“It’s kind of sad to leave all my club and high school teammates,” Royer said. “After nationals, we were all like, ‘Man, this is it.’ We’ve been playing together since we were 14 years old. It’s probably good for all us to see the other side of it. We’ll always keep in touch.”

Royer won’t be in totally unfamiliar company at St. Ambrose. Older brother Nate is junior outside hitter for the Fighting Bees.

“I played with my brother before,” Austin Royer said. “It will be cool to play with him again.”

Sports Performance B17 Mizuno finished fifth in the 17 Open division, losing to Roch PaceBootlegger 17 25-19, 25-20 in the quarterfinals.

Sports Performance B16 Runbird placed third in the 16 Club division, losing to eventual champ Ka Ulukoa M16 Mizuno 25-21, 25-16 in the semifinals to finish 8-3.

Sports Performance B18 Elite finished fifth in the 18 Open division.

“We are returning very strong passers, experienced middles who will both be third year varsity starters and one of the best offensive players in the state,” Grant said. “Expectations are very high. The boys understand that and they are embracing it.”

Grant will continue to serve as head coach of the girls program at Glenbard South, where he has also been for nine years and head coach for the past four.

***
Wheaton Warrenville South is looking for a boys freshman B team to participate in a quadrangular on May 23, 2015. If interested, contact WW South head volleyball coach Bill Schreier at William.Schreier@cusd200.org.

Among the All-Americans in the 16s were Melinda Bloomberg of Sky High 16 Purple; Abby Majercik, Sydney Holt and Isabella Milejczyk of Sky High 16 Blue; and Alexis Bass and Ashley Anne Walker of Sports Performance 16 Navy in the 16 Classic division.

Named All-Americans in the 17s were Kelly Bertrand of Sports Performance 17 Runbird in the 17 Classic division; Maggie McGraw of Club Fusion 17 White and Michaela Ping of Fusion South 17 Red in the 17 Club division; and Valentina Manns of Ultimate G17 Gold in the 17 Premier division.

Milejczyk, Martino and Minarick were named MVP in their respective divisions.

***
The next Junior Players Beach Volleyball Series tournament at North Avenue Beach will be held Sunday, July 27. The event has four divisions for boys and girls – 12U, 14U, 16U and 18U.

All teams are guaranteed at least three pool play matches with the top teams advancing to the playoffs. Winners receive medals, sponsored gear and championship fleeces.

For more information, go to https://luauvolleyball.leaguelab.com/page/juniors.