Something new? That will be Mount Carmel this season

Maybe the best senior class in Mount Carmel history has graduated, with many heading off to play major college football. 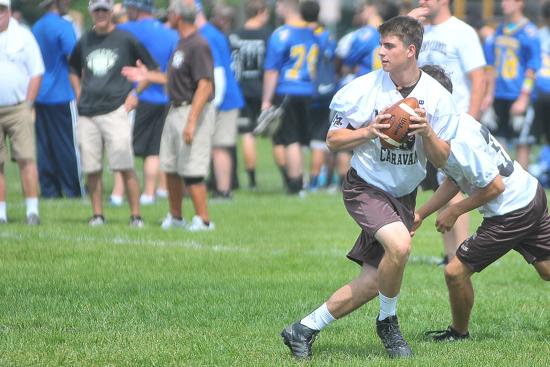 Mount Carmel QB Anthony Thompson rolls back into the pocket in the Richards 7on7. | Worsom Robinson/For Sun-Times Media

Maybe the best senior class in Mount Carmel history has graduated, with many heading off to play major college football.

No more 1,000-yard rushers Matt Domer or Jimmy Mickens to run the ball in the Caravan’s classic triple-option offense. And no more Marco Boricich to hand it off to them, run it himself or soften up the defense with a well-timed pass.

They’re all gone, along with every other offensive starter from last season’s Class 7A state final — won 30-0 by Mount Carmel over Lake Zurich — other than right tackle Jack White.

The defense won’t have quite as much turnover; four juniors started on that side of the ball in the state title game. But it’s probably safe to say it’s been a while since the two-time defending state champ (the Caravan won in 8A in 2012) has had this many position battles going on in July.

“We’ll be green there early and that’s OK,” said Frank Lenti, the state’s all-time winningest coach, who’s heading into his 31st season. “It’s never been our goal to go undefeated.”

With all the changes, expectations may be down a notch for the Caravan.

“It’s fine with me,” said Marquise Peggs, a rising senior cornerback. “Keep stuff with us, people (are) not feeding into the hype. We’re focused on our team, getting our stuff ready (and) at the end, just make a statement opening game.”

That opener is an intriguing one, Aug. 31 against Philadelphia’s St. Joseph Prep at Toyota Park. It’s part of the Preseason Prep Bowl, which was bumped from its usual home at Soldier Field because of a scheduling conflict.

Who’ll be the players to watch in that game for the Caravan? Good question.

“We’ll see who can move the team the best,” Lenti said. “There’s a lot of competition there.”

Ditto for the rest of the backfield. Senior Jaquan Bunton, who ran for 504 yards (7.6 per carry) and three touchdowns, is the top returning rusher. But also keep an eye on senior Niko Vjestica and junior A.J. Lewis.

“We’re going to have to decide where Jaquan is going to fit best,” Lenti said. “Is it on offense or defense? We don’t know.”

Lewis “is a lot of fun to be around,” the coach said. “Great personality.”

Vjestica, meanwhile, seems destined for a bigger role this fall. “He really put in a lot of hard work to make himself quicker and stronger and faster,” Lenti said.

Sorting out the depth chart will be job one during the Caravan’s summer workouts. Peggs said it’s so far, so good.

“We’ve got to work on being disciplined,” he said. “Working on fundamentals and stuff like that. ... In camp, we showed some promise. So it’s just ... putting the pieces together.”