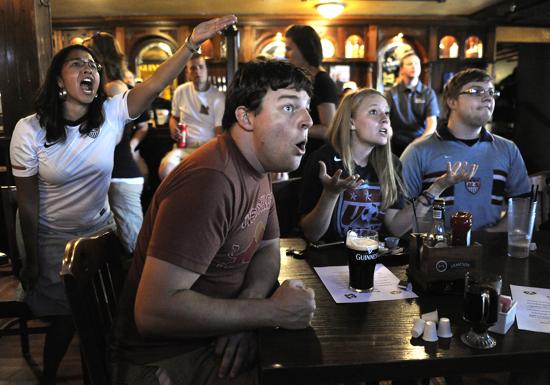 It has to happen and it will happen. It’s inevitable. Association football, what we call soccer, will eventually replace American football in our high schools. The reason it will do so is compelling. Therefore, why not begin the process now, and why not begin it here?

Before you send Ann Coulter out to bite me for suggesting that our kids play a game she believes is socialist, because “individual achievement is diluted,” effeminate, because it’s a game girls can play, and foreign, because American exceptionalism demands that we reject anything international, I should tell you that I am a big Bears fan.

Walter Payton is my favorite player of all time, and one of my fondest memories is sitting in the end zone watching him throw a touchdown to Jim McMahon. Although it’s going to have to undergo significant changes, I’m glad professional football will be around a long time.

But this year’s World Cup is proving that soccer’s popularity has turned the corner among Americans. Our win over Ghana, tie with Portugal, and loss to Germany got us into the Round of 16, where we narrowly lost to Belgium. That game, however, rated a Nielsen 9.6 and made goalkeeper / “secretary of defense” Tim Howard a hero. Including ESPN live streaming, the World Cup is being watched by more Americans than watched the Olympics or NBA playoffs.

Soccer’s popularity is generational. The younger you are the more you like that you don’t have to be 6’5” and 350 lbs to play it, the more you enjoy the diversity of languages and nationalities, and the more you think that American exceptionalism should mean winning international contests. Anyone who thinks that the game is effeminate and that individual achievement doesn’t count should watch today’s 3 p.m. semifinal match on a high definition TV.

But soccer’s popularity is not the reason it will replace football in high school. Traumatic brain injury is. Because helmets do not prevent the brain from sloshing around inside the skull, many neurologists now believe that sub-concessive hits add up, causing subtle brain injury. They’re finding that the volume of a vital brain area responsible for memory and spatial navigation is reduced in young, healthy players who were unaware they had been hurt.

Adolescent brains are still forming, and it takes perhaps four times longer to repair damage to them. Actual concussions raise the probability of later dementia exponentially. Coaches everywhere are limiting full contact drills in practice and during the pre-season and new helmets and sensors are being designed, but there’s no evidence that such things eliminate the subtle but measurable changes to memory and personality caused by sub-concussive hits.

Tragically, we’re just now realizing how much full blown chronic traumatic brain disease, or encephalopathy, football has already caused. CTE, as it’s known, was responsible for the suicides of Dave Duerson and Junior Seau, whose photographic memory faded away, and already seems to be affecting players like Tony Dorsett, Leonard Marshall, Brett Favre, and Jim McMahon.

The brains of young players can still show signs of injury six months after as few as a dozen hard hits. How many parents will continue to allow their kids to risk their intellectual futures that school is supposed to be building, not destroying?

There’s no evidence that soccer causes any such damage. Major League Soccer teams, like the Chicago Fire, have the fastest growing fan base in the country, and the game fits the changing demographics of America and this area. Anyway, things won’t really change. The clothes will be as flashy, the crowd will be as noisy, and the lights will be just as bright on Friday night.