Barrington had one of its most successful football seasons in a decade in 2013, winning 10 games. As the Broncos begin July practice sessions, they look forward, but glance backward. 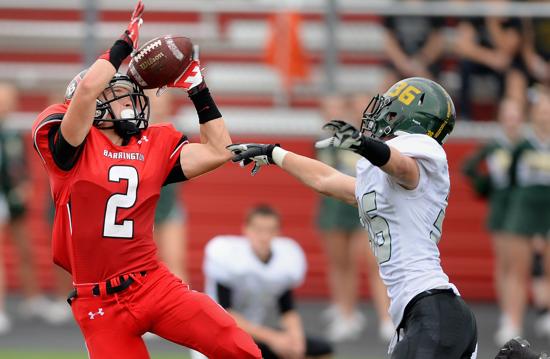 Barrington’s Matt Moran (2) pulls in a big catch for a first down in front of Fremd’s Jonathan Van Duch during a game last season. | Brian O’Mahoney/for Sun-Times Media

BARRINGTON — Barrington had one of its most successful football seasons in a decade in 2013, winning 10 games. As the Broncos begin July practice sessions, they look forward, but glance backward.

A 14-0 loss to Stevenson in the Class 8A quarterfinals in November is not top of mind. But it is not forgotten.

“The success of [2013] and the tough defeat, that’s been a catalyst or motivating factor to get back there and push through those lulls,” coach Joe Sanchez said.

Senior Dylan Abel and junior Nate King shared running back duties for much of 2013. But Sanchez has liked what he’s seen in June 7-on-7 tournaments from seniors JT Henderson and Dumaso Mkwananzi. Henderson played in the 2013 opener against Jacobs before suffering a season-ending knee injury and Mkwananzi missed his junior year with mononucleosis.

Barrington should have an embarrassment of riches at running back.

Sanchez could say the same about the Broncos receiving corps. Seniors Scotty Miller, Matt Moran, Dylan Bingham and Mitch Pfeiffer make up a versatile unit that will stretch any secondary.

But when Barrington opens its season Aug. 29 against Jacobs, whoever is under center will be making his first varsity start. Daniel Kubiuk, last year’s 12-game starter at quarterback, has graduated. Who will seize the position in July and August trumps all other Broncos concerns this summer.

“There are a couple of guys battling for the spot,” Miller said. “Both are playing well. That’s exciting to see.”

Although Sanchez is coy about who is in the mix, look for either senior Adam Broomfield or junior John Davidson to win the job.

Broomfield was a backup to Kubiuk as a junior. Miller said the 5-foot-10, 170-pound Broomfield is a physical runner while Davidson (5-foot-10, 175 pounds) is more pocket-oriented. Expect senior Anthony DeVita (6-foot-3, 170 pounds) to get reps this month.

All will be working this month toward preparing for the season opener and what the Broncos hope will be a run at a second consecutive MSL West title.

“We were a quarterfinal team but we want to be better,” Coon said. “We know we can play in that big game, play with any team in the state of Illinois.”