Lyons alumnus Stewart Nelson is spending his summer with the DuPage County Hounds and working on his speed on the base paths. 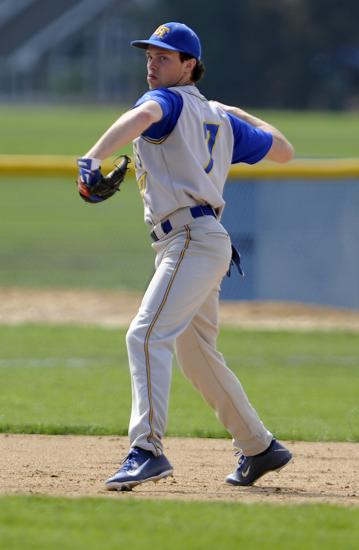 Stewart Nelson played two years for Lyons before heading to Evansville, where he redshirt his freshman season. | FILE

Stewart Nelson, a 2013 Lyons graduate, doesn’t consider himself a diamond in the rough, but there’s no doubt he has a lot of upside after getting a late start in baseball.

The University of Evansville infielder/outfielder didn’t start playing baseball until he was 11 and he wound up missing much of his first two seasons at Lyons due to injuries from other sports.

Nelson tore his labrum during basketball season as a freshman and then broke his ankle playing hockey as a sophomore. That’s when he decided to give baseball 100 percent of his attention.

“I started most of my junior year at shortstop and that’s when I started getting recruited,” Nelson said. “I started playing with the 29ers [in Naperville] that summer and coach Todd Lawler really helped me realize I had the tools to play college ball. Todd really made a huge impact in my baseball career even though it was a short time. He really hammered it home for me and he helped me improve my skills.”

Nelson spoke with South Dakota State, Oakland and Creighton, but felt Evansville was the perfect fit for him. After graduating last spring and relaxing one last summer, he headed to southern Indiana, hoping to find some playing time as a freshman.

After fall ball, Evansville coach Wes Carroll came to Nelson with the idea of having him redshirt his freshman year.

“I had a pretty good fall but I was going to be the backup shortstop and second baseman,” Nelson said. “I didn’t really expect [redshirting], but I did have a say in it. A lot of people are bitter about redshirting, but I think it was a very good decision for me to take it.”

Redshirting didn’t change Nelson’s approach. He was still able to practice with the team and travel on road trips. He just couldn’t play in games.

He tried to be a sponge, soaking up the experiences of college baseball. He got to see his team win the Missouri Valley Conference regular season title and he made strides in his game.

Nelson is continuing to work on his game this summer, playing for the DuPage County Hounds in the Midwest Collegiate Baseball League.

“My biggest strength is my speed,” Nelson, who had two stolen bases heading into the week, said. “That’s one of my tools that I’m trying to use more. I’m working on bunting more this summer. I should be able to beat it out if I work on my location. Then if I get on first, I should be able to steal second and then steal third.”

Nelson is winning the admiration of his teammates.

“He likes to play small ball,” Hounds outfielder Frankie Perrone, who graduated from Maine South and attends Eastern Illinois, said. “He does the little things that you don’t always see in the scorebook. And he’s always making the team laugh. He’s a real fun guy to be around.”