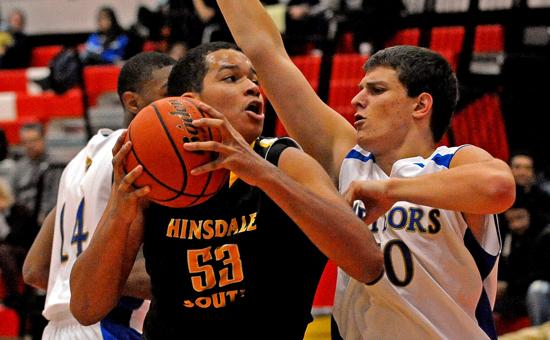 Hinsdale South rising junior Barret Benson (left) has worked on his game during the offseason, taking yoga classes and playing in summer leagues with the Hornets and the Illinois Wolves. | File

At 6-foot-10, 240 pounds, Barret Benson would not seem like a typical participant in hot yoga classes. His instructor disagrees.

“Any athlete, because of the heat, it helps their muscles, it helps their joints and with their flexibility,” JoAnn Dwyer said. “It’s wonderful to see when they do it. They think it’s a girl-thing. When the men get there, they realize it’s more difficult than they think.”

In the spring, Benson, a rising junior center for Hinsdale South, took one-hour classes, three to four times a week, for about three weeks. He said his mother Joan, who also teaches yoga, joined him for his first class, but only a few men participated.

During Benson’s classes at CorePower Yoga, room temperatures reached up to 105 degrees, according to Dwyer.

“For him, being a big guy, I know he’s lost 15 pounds,” Erin Dwyer said. “This will help him get a stronger core, hips and flexors.”

“Coach Dwyer said he’s been doing it for a while,” Benson, a Willowbrook resident, said. “It helped me with my strength and stability and helped me develop a higher core.

“The first time was crazy doing [yoga]. You get used to it. The heat makes you sweat harder a lot more, and you burn a lot more calories. It’s more difficult. The room is really hot in there.”

Benson is already catching recruiters’ eyes. He has offers from DePaul, Indiana, Oregon State, Penn State and Purdue, according to Rivals.com.