Plenty of competition for spots at Sandburg

Sandburg coach Dave Wierzal has a lot of decisions to make regarding his 2014 starting lineup. 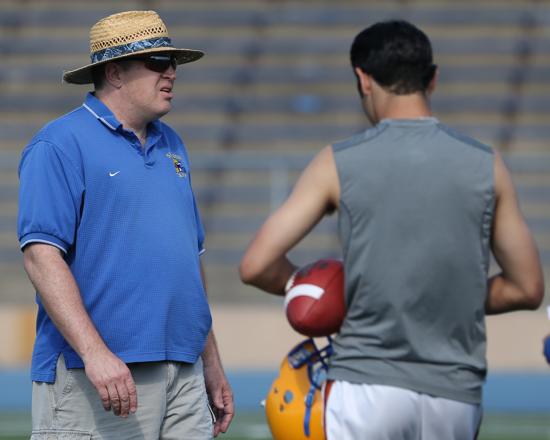 Sandburg coach Dave Wierzal has a lot of decisions to make regarding his 2014 starting lineup.

The summer is a time for players to step up and make those decisions easier.

“We return three starters on defense and three on offense,” Wierzal said. “Other than that, all these positions are up for grabs and we’ve got a lot of competition for them.”

The competition is especially fierce at the quarterback spot. Four players — seniors Zach Zvad and Tamonte Brown and juniors Trevor Nash and Avery Verble — are getting reps under center this summer.

“It seems like we have this issue every year where we’re not quite sure who the quarterback is going to be,” Wierzal said. “These guys are competing hard and looking good, though.”

The Eagles bring back some weapons from last year’s squad that made the playoffs with a 5-4 record before losing 49-14 to Homewood-Flossmoor in a Class 8A first-round game.

“Adam Valiga is a tight end/split end for us,” Wierzal said. “He has great hands and he’s a nice target at 6-foot-3. Rasheed Carney is another good receiver for us who started last year. Paul Chimera is another big, tall receiver, a great volleyball player who can get up and make plays for us.”

Carney, who was the team’s leading receiver in 2013, and Chimera both were absent when the team competed in the Richards 7-on-7 Passing Tournament. Carney was injured and Chimera had a volleyball commitment.

The absences allowed Wierzal a chance to evaluate other players.

“We feel like we have other kids who can catch the ball,” he said.

Defensively, linebacker William Hubble figures to be one of the leaders. Big things also are expected from defensive back Mike Saylors.

“Hubble is a returning starter and Saylors is a guy who got a lot of playing time last year,” Wierzal said. “We need (Saylors) to step up. After that, everything is up for grabs and we’re going to take a look at a lot of kids.”