If recent history is any indication, Neuqua Valley is going to have a surprise breakout player next winter. 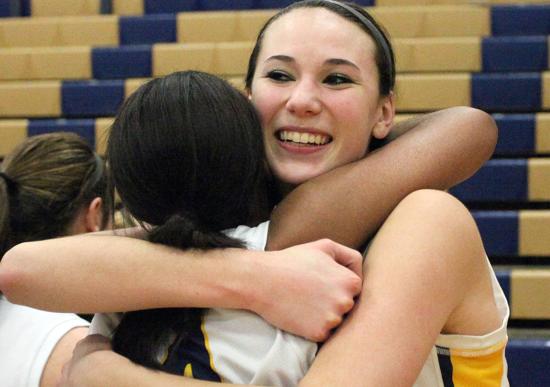 If recent history is any indication, Neuqua Valley is going to have a surprise breakout player next winter.

Two years ago, Allison Hedrick came out of nowhere to win Upstate Eight Conference Player of the Year honors for the Wildcats.

Last season it was Niki Lazar who stunned everyone by doing the same, leading Neuqua to a 28-6 record and its first sectional title since 2002 en route to being named Naperville Sun Player of the Year.

Neuqua Valley coach Mike Williams didn’t see either of those performances coming, so he won’t even hazard a guess at who could emerge in 2014-15.

“I hope we have four Niki Lazars,” Williams said. “You just don’t know who it will be and that’s the fun part.”

Hedrick had an unremarkable junior season before her breakout campaign, while Lazar was a four-year varsity player who had been a role player her first three seasons.

The leading candidate to take over that role is 6-2 senior center Bryce Menendez, who showed steady improvement as a junior and will be counted on to be a dominant presence in the paint.

“She’s gotten stronger and definitely more confident,” Williams said. “What you need is some great senior leadership. Bryce has kind of been waiting in the wings and I really think you’re going to see a kid that says, ‘Let me do whatever it takes.’”

Menendez recently committed to Lehigh, the first player on the current roster to secure a college scholarship. The Wildcats lost five seniors to graduation, four of whom are playing in college.

“You always hate to see kids go, but that’s a challenge for the younger kids to improve,” Williams said. “It will be exciting to see who steps up.”

The Wildcats had a solid June, doing well against stiff competition at the llinois and Louisville team camps. They beat Trinity at Illinois, edged Joliet Catholic by two points at Louisville and did not suffer any big losses.

“All of the losses were close,” Williams said. “These were all four- or five-point games.”

Neuqua Valley figures to be in good shape at the guard position with juniors Myia Starks and Kai Moon primed to step into full-time starting roles. But the forward line shows promise as well with senior Jamie McInerney, who was the soccer team’s starting goalkeeper this spring, and sophomore Megan Keefer both ready to assume more responsibility after playing reserve roles.

The Wildcats also have senior forward Maya Cobb, a two-year varsity player who could be a rebounding force, and newcomer Ezgi Ulger, a sophomore guard who could emerge as a leading perimeter threat.

“Megan Keefer is really stepping up,” Williams said. “It will be fun to see what she can do. [McInerney] is a phenomenal natural athlete. She does well at every sport she plays.”