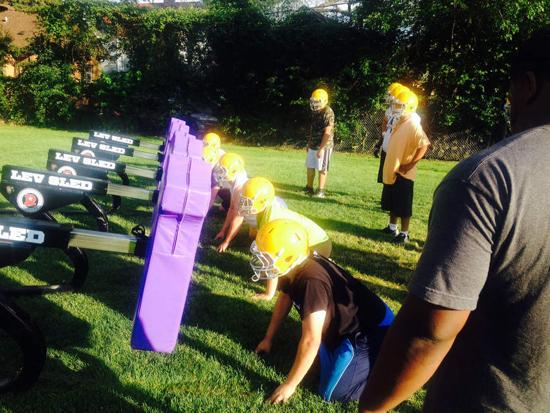 Waukegan football has a wealth of talented, hard-working linemen who will be difference-makers this fall. They're working out here last week during a summer practice. | SUN-TIMES MEDIA PHOTO

Weekday evenings for the past three weeks, and continuing this week, about 40 boys from Waukegan High School are battling the heat and each other as they try to prepare to represent Bulldog football in the fall in a way that will do the community proud.

Supervising them are maybe seven or eight members of the community, who are coaching the kids during their IHSA-approved summer workouts.

That’s 47 or 48 good guys total working up a sweat and working hard to achieve the team’s motto for the 2014 season: Bulldog Football: Bring It Back.

Now, the reality is what’s happening at Waukegan High’s football field these days is no different than what’s occurring on football fields at every other high school around here.

With one enormous difference.

Three things you can pretty much count on that in that regard:

■ The new coach will be approved at the next school board meeting, which is July 22.

■ Chances are 99.9 percent and inching toward 100 percent that none of the seven or eight men volunteering their time to coach these kids through summer workouts is going to be the team’s next head coach.

■ At least one and maybe two of the Waukegan School Board members are not going to be happy and will voice their displeasure at the July 22 meeting with having candidates for the head-coaching position be limited to teachers who are employed at the school.

But rules are rules. And though the adage is that rules are made to be broken, not paying your taxes is not one of those rules to break.

And at Waukegan High, neither is hiring a head football coach who is not employed at the school.

And so, we give total props to the players and the adults who are coaching them this summer as they prepare for another year of Bulldog football.

The players out there are fully aware that they are being taught plays that may never see the light of day again after July 22, and the adults doing the coaching are totally aware that it is the head football coach that selects his assistants, and that some or all of them may be spectators when practice starts for real on Aug. 11.

That’s a tough spot. It’s tough being a kid learning and taking direction from someone who may not be around next month, or may be teaching you something that you aren’t going to be doing next month.

And it’s equally tough on the adults, who are coaching these kids and trying to get them prepared to play football without knowing if they’re even going to be part of this in another month.

Yet, every day, the players show up to play and the adults show up to coach, and every one of them should be commended for their effort and caring.

Ironically, Waukegan High was in this exact same position four years ago, when Derek Dewitt was not invited back to coach a second year.

That summer, the workouts and practices were put together by lower-level coach Nick Browder. Browder having done all the heavy lifting during the summer, was then hired as interim coach for the 2010 season.

After that year, he then applied for and was named the real head coach, which is what he was until resigning in May to take an athletic director’s job at a high school in Arizona.

While Browder did the heavy lifting for the program in the summer of 2010, the point man in 2014 has been Ryan Stewart, who coached Waukegan’s sophomore team last season.

Stewart’s been in charge this summer, and that fact plus a buck will get him a copy of this newspaper. What it won’t get him is the head-coaching job.

You see, the difference between Browder and Stewart is that Browder worked at Waukegan High School when he was named interim and then head coach. Stewart does not.

Stewart said he did interview for the head-coaching position, but all that fact did was remind of something that happened in this area a couple of years ago.

After basketball coaching legend Chuck Ramsey was let go at Warren High — he was retired from teaching and the school wanted the varsity head coach in the building — he interviewed for the head-coaching job at Deerfield High.

At the time, Deerfield was searching to replace its coach because that guy did not teach at Deerfield High School and the school clearly wanted their head coach to be in the building.

Nothing wrong with that. But it did beg the question of why on earth would Chuck Ramsey ­be interviewed for the job because he was retired as a teacher and certainly wasn’t going to go back to teaching. Heck, if he was going to do that, he could have gone back and taught at Warren.

Deerfield did hire a new coach and he, of course, worked at the high school.

Didn’t have the heart to tell Stewart that story when he was talking about his desire to be the Bulldogs’ next varsity head coach.

The sad part here is that Stewart is planning ahead, and those plans might get blown up.

Football is the ultimate team sport, and he and his other coaches on the field are planning team-bonding events such as a barbecue and a paint-ball event that are designed to bring the team together.

“These guys have done a great job at camp,” said Stewart, an upbeat guy who’s got a son in the Jr. Bulldogs youth football program.

That sentiment was echoed by other coaches on the field.

“I’ve definitely see the attitude in the kids change,” said Jerry Bey, who’s been a staple in the Bulldog program for several years and is thinking big picture for the youngsters. “My whole thing is about giving kids a better outlook on life,” he said.

Another assistant, Chris LaCivita, was Waukegan’s freshman coach when the current group of seniors were freshmen. He’s seen them grown as players and as young men and is totally believing that with a strong line and a strong quarterback in place, that good things are going to happen on the field this fall.

At the end of practice, the players huddled up, and several of the coaches offered praise for the effort put forth, and also voiced words of motivation … the gist of it being that on game day, every player wants to win. It’s how badly you want to win on practice days that makes the real difference.

In any case, in another week or so, the Waukegan football coaching baton will be passed. The good news is that this group of players looks like it understands what it takes to be successful on the field.

And for whoever the next coach is, that’s an excellent starting point.