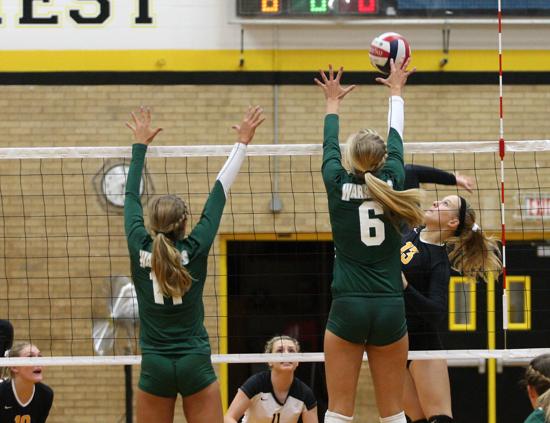 The good news for Waubonsie Valley is that practically everybody is back from the 30-8 team that reached the sectional final last year before losing to Benet 25-21, 24-26, 25-13.

The bad news is that one of the players who won’t be back is Chicago Sun-Times All-Area selection Rachel Minarick.

Minarick, who was recently named MVP of the 18 Open division at the AAU Junior National Championships, is headed to Michigan State in the fall after contributing 364 kills, 452 assists, 43 aces and 105 blocks for the Warriors last year.

“She was our setter for four years on varsity and was obviously a special player in a lot of areas. Yeah, we’ll miss her. But we’re excited. Everybody’s ready to step up.”

“We just started camp this week,” Stuart said. “We’re just starting to see the leaders emerge. That’s the other thing that comes into play when you have a huge leader (Minarick) leave. See who steps up. But I think players like Becky and kids who have been on the team are ready to do that.”

Stuart hopes on of those who emerge is Hiller, who ran a 6-2 with Minarick last year.

“She’s experienced, she’s just not as physical, not as big,” Stuart said. “But she has good hands, she knows what to do. We’ll have to see what happens if we run a 5-1 with her or a 6-2. But anyone in a setting position has to take on that leadership role.”

Waubonsie Valley got off to a good start in the summer league last week, splitting sets with Yorkville and 2013 Class 3A finalist LaSalle-Peru and defeating Plainfield North 25-14, 25-16.

“They’re really a great group of girls.” Stuart said. “They work hard, they get along well, I really like them. We’re going to work as hard as we can. We’re not going to call this a rebuilding year, but we understand it’s going to be a little different at first. But we’re going to continue to raise our level.”

***
A not-so-funny thing happened to Glenbard West on its way to what was supposed to be another showdown with New Trier in the Class 4A supersectional last year. Geneva and freshmen Grace Loberg and Ally Barrett derailed the Hilltoppers in the sectional semifinals.

But Glenbard West, which finished 34-4 in 2013, should be loaded again this year behind Duke recruit Natalie Schilling, a 6-foot junior outside hitter, three-year setter Kate Wagner and 5-10 senior outside hitter Alison Burelbach.

“I’m excited,” coach Pete Mastandrea said. “The libero spot is the big question (where Chicago Sun-Times All-Area selection Meg DeMarr held fort). But I think at every other position we’ll be as good if not better than last year. Schilling and Burelbach will be the best tandem we’ve had at outside hitter.”

Schilling, Mastandrea’s first true early commit, will be the key for Glenbard West.

“Our conference has always had a player like that who wasn’t on our team, like (Michigan’s) Ally Davis at Hinsdale Central and (Illinois standouts) Alexis Viliunas and Jocelyn Birks at Lyons. Those are the kind of hitters who can carry a team.

“I hope we can develop enough pin-to-pin players that it’s not going to be all on Natalie’s shoulders, because then you don’t have to rely on her a lot. Then you can just let her be herself. Then I think we’re going to be OK.”

Wagner ran a 6-2 with St. Francis transfer Abbey Winkler last year, but with Winkler graduated, Wagner may run the show through six rotations.

“Kate’s looking sharp,” Mastandrea said. “I like her. She’s started since freshman year. She’s a nice player, a nice kid, very coachable. She’s a solid athlete. Last year she was our best serve-receive passer. Serve receive and defense will be our biggest questions this year.”

Seniors Jaime Ryan and Abbey Matre will try to fill the void left by DeMarr’s graduation.

“I am a little concerned about our ball control,” Mastandrea said. “Losing DeMarr, those are big shoes to fil. She was an exciting player for us. She could have played any position. She fit our mold perfectly.”

Former Benet and current Villanova standout Gabby Pethokoukis was recently given a clean bill of health after undergoing intensive chemotherapy at Northwestern Memorlal Hospital this summer to treat Burkitt Lymphoma.

Burkitt lymphoma is a form of non-Hodgkin's lymphoma in which cancer starts in immune cells called B-cells. Burkitt lymphoma, the fastest growing human tumor, is associated with impaired immunity can be quickly fatal if left untreated for any length of time.

However, intensive chemotherapy can achieve long term survival in many people diagnosed with Burkitt lymphoma.

“She received support from so many people,” her father, John Pethokoukis, said. “Several of her teammates flew in to visit her at the hospital. Many of her old teammates from Benet came by. She even received a card signed by all the members of the volleyball team at Seton Hall.”

The 6-foot-3 Pethokoukis was a member of the 2011 state championship team at Benet and was an all-Big East second team selection this fall at Villanova. After an injury sidelined her for the early part of this season, she appeared in 17 matches and finished second in the conference with a .351 attack percentage.

Pethokoukis averaged 2.63 kills per set and 0.76 blocks/set, while reaching double figures in kills seven times, including a span of four consecutive matches. She garnered conference honors following a 19-kill, seven-block performance against Georgetown in which she had a .429 attack percentage.

Pethokoukis recently returned to Villanova to take summer courses. She hopes to return to the court by the start of conference play in October, but she still faces a long road to complete physical recovery.

***
The Pethokoukis family will be earning some major frequent flier miles this fall with Gabby hoping to return to the court for Villanova and younger sister Sam beginning her freshman season at Siena College in Loudonville, N.Y.

Sam, a 6-foot-2 middle hitter and 2014 graduate of Fenwick, was a top 50 preseason Sun-Times selection as a senior and team MVP for the Friars. Siena is located just outside Albany and competes in the Metro Atlantic Athletic Conference.

Michelle Jakubowski is moving from the front office at Huntley to the sidelines at Barrington.

Jakubowski, who coached for 18 years at Winnebago, Lake Zurich and Huntley, served as Huntley’s athletic director for the past two years. But she said she missed the competitive outlet that coaching provided.

So when Rob Ridenour stepped down after six seasons as girls head coach at Barrington, Jakubowski quickly applied for the vacancy.

“I’m very excited to get back to my passion which is coaching, and to also be able to coach at a school rich in tradition,” she said.

“We are working hard at camp and we are playing in the summer league at Sky High,” Jakubowski said. “The girls are working very hard and continue to get better every day.”

Jakubowski led the Red Raiders to a 149-75 record and three regional titles during her six seasons as head coach (2006-12). She has won more than 350 matches in her career.

Former Freeburg standout and Indiana middle hitter Annie Seitelman, who was an assistant coach at Geneva last year, has been named to succeed K.C. Johnsen at the reins of the Geneva girls volleyball program this fall.

Johnsen, who led Geneva to the best season in program history in 2013 with a 29-10 record and a berth in the supersectional behind super freshmen Ally Barrett and Grace Loberg, was relieved of his duties as girls coach at the end of the boys season.

Sports Performance had four teams finish in the top 10 at USAVs, more than any other non-California club.