Shumpert was promoted to the Huskies varsity midway through his freshman season. Maloney was the sophomore coach at the time.

Three years later, veteran OPRF coach Al Allen hung up his whistle after Shumpert, who graduated in 2008, played his final high school game, a 69-61 loss to Young in the Class 4A Proviso East Sectional final.

Maloney was named the varsity coach the following season.

Regardless, Shumpert still regards Maloney as a close friend and adviser.

“We are extremely tight. I used to go to his [history] class to bother him and joke around with him,” Shumpert said. “You talk about somebody who never got the chance to coach me, but has always been there for me. He’s always there to help me work on my shot. He calls me during the season, emails me during the season to check up on me and make sure my head is right. He’s been just as much as a coach as Coach Al has been through the years.”

The 24-year-old Shumpert, a three-year veteran with the Knicks who averages 7.7 points, returned home last week to conduct his youth basketball camp at OPRF. The 6-foot-5 guard is an ambassador for the Oak Park-River Forest community and has become a guardian angel for the boys basketball team. Maloney served as an instructor at Shumpert’s camp.

Last season, through his endorsements for Adidas, Shumpert provided new warmups for the basketball team. In the past, he has donated shoes, T-shirts, backpacks, bags and socks.

Shumpert’s motivation is simple. He remembers what he didn’t have when he was with the Huskies, and wants to provide for current and future OPRF basketball players. 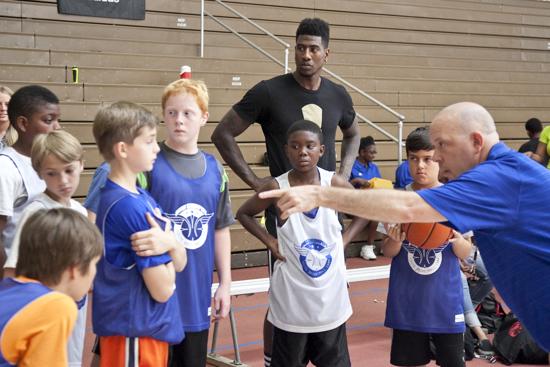 “I’m a big-time warmup guy,” Shumpert said. “I know we just don’t want a T-shirt to wear over our jersey. We want something nice with a zipper, maybe a snap breakaway. I try to keep it fun for them. I try to keep it exciting. I don’t have to have the credit. Maloney just does that. I do it more so for the kids. They deserve it. They work hard.”

Whether it’s through a corporate sponsor or from his own pocket, Shumpert’s bond with OPRF and its basketball program remains strong since he stepped into the school as a freshman.

Maloney recalled that Shumpert declined to attend the NBA Draft in New York so that he could celebrate with family, friends and former OPRF coaches and players at La Majada in Oak Park.

Allen also witnessed Shumpert’s close bond with the school. When Shumpert was still at OPRF, he asked to work with special education students during P.E. class.

“[Shumpert] gave back to the school to help us,” Allen said. “He gave all his [study halls] back to the physical education program.”

Allen said that after Shumpert was done working at his youth camp July 8, the former Huskie volunteered his time for Opportunity Knocks, a River Forest center for individuals with developmental disabilities.

Maloney is not surprised when he hears stories about how Shumpert gives back to the community. The coach said he heard Shumpert in 2011 tell children visiting the high school to be proud of their roots:

“ ‘When people ask you where you’re from, don’t say Chicago, tell them Oak Park.’ ”