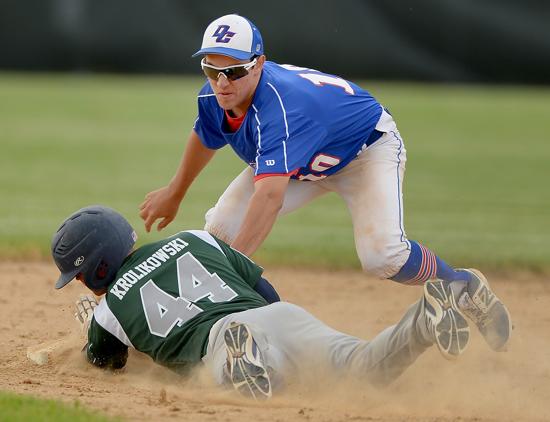 However, late in the year, the offense started to kick in, leading to big series wins over Neuqua Valley and Metea Valley, and during the summer season the Hawks seem to have taken it one step further after Barrutia and Wick graduated.

The whole offense clicked Monday in a 12-2 mercy rule-shortened win over Dundee-Crown in the Roselle Regional of the Phil Lawler Classic summer baseball tournament.

“I wouldn’t say to this degree, but all through our summer season guys have been doing things,” Bartlett coach Chris Pemberton said. “One through 20 on our roster, everyone’s been contributing. It’s good to see it all come together now in more critical situations.”

The Hawks did well enough in summer to earn a second seed in the regional, and with the win advanced to Tuesday’s 2:30 p.m. quarterfinals to host the winner of Monday’s Elgin-St. Viator game.

“We all got the approach of take it where it’s pitched,” Tripp Paris said of the Hawks offense. “Everyone’s been hitting — top to bottom of the lineup, everyone contributes.”

Paris went 3-for-3 with three runs, a double and an RBI batting in the seventh spot. No. 9 hitter Robbie Euliano was 2-for-2 with two RBI and a double, No. 6 hitter Mike Pfaender had two hits and an RBI and No. 8 hitter Vince Searson drove in two runs and singled. The Hawks also got a two-run single from No. 2 hitter Cameron Mays in the five-run third to break open the game.

“Those guys like Tripp, who were with the varsity in spring, have had some experience now and I think they’ve found their comfort zone,” Pemberton said. “No longer are they feeling under pressure. They’re older guys and are more relaxed in those (pressure) situations.”

A two-run single by Cori Krolikowski in the fifth ended the game by the 10-run rule, while pitcher Joey Roberson got through with only five hits allowed and seven strikeouts.

“He starts a little slow, always,” Pemberton said, referring to the fact the Hawks trailed 1-0 after a half-inning thanks to Mike Cruise’s RBI groundout. “He lives a little bit dangerously.

“He’s not a hard thrower, just kind of nibbles and keeps them off balance, but he did a good job mixing it up and throwing strikes for us.”

The Chargers had won a play-in game just before the loss to Bartlett, 2-1 over Schaumburg, as pitcher Riley Alvarado allowed five hits and took the victory.

“Riley did a nice job of keeping the ball down in the zone,” coach Jon Anderson said. “He threw a lot of first-pitch strikes and it made a huge difference.”

The Chargers played without a couple of standouts much of the summer. Star pitcher Aaron Ludwig has been with the Barrington legion team and reliever Dan Denz with a travel team.

“We’ve had a solid summer,” Anderson said. “It gave everybody who was up a chance to experience varsity baseball and we had quite a few juniors.”