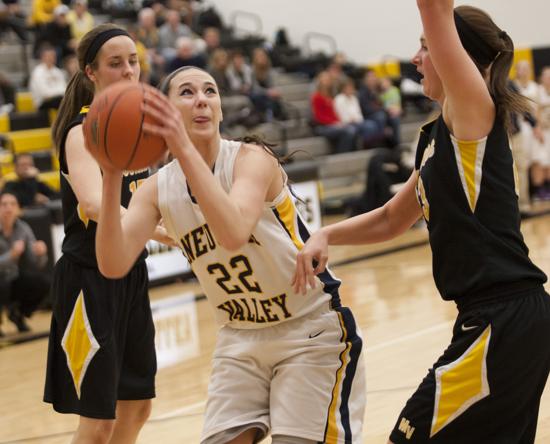 Lehigh was the first Division I school to recruit Neuqua Valley’s Bryce Menendez.

While the 6-2 center flirted with other top-notch academic universities like Princeton and Yale, she ultimately returned to her initial suitor, accepting an offer from the Patriot League institution.

Menendez became the fifth Neuqua Valley basketball player to commit to play college basketball in the past three months and the first from the Class of 2015.

“I’m very excited,” Menendez said. “I wanted a good-sized school with great academics and the team had to be a good fit. All the players I met at Lehigh were awesome.

“They use all the girls on their team, so they said I’d play my freshman year. I saw an opportunity to make a difference right away.”

Menendez wants to make that difference off the court as well. The straight-A student plans to go into the pre-med or biomedical engineering majors with the goal of becoming a plastic surgeon.

“All my life I’ve always wanted to help others,” Menendez said. “I know I can do cosmetic surgeries, but I want to focus on the reconstructive side to help people who have been disfigured or burned, like soldiers hurt in war, to find some happiness.”

Those noble goals are still in the future. First, Menendez wants to spend her fourth and final year on varsity helping Neuqua Valley continue the momentum built during her junior season, when the Wildcats went 28-6 and won their first sectional championship in 11 years.

It won’t be easy because Menendez will be the team’s only returning full-time starter, but she’s ready.

“Every since freshman year I’ve known that senior year would be my year,” Menendez said. “I’ve watched everyone else come through and get their chance and do an amazing job, and now it’s my turn.

“I’m the only senior on the team that’s been on varsity for four years so I’ve always wanted that responsibility.”

“Bryce has shown so much more confidence on the court this summer,” Williams said. “That’s something we’ve been waiting for from her.

“Bryce has kind of been waiting in the wings and I would think you’re going to see a kid that says, ‘Let me do this.’”

Up until this point, Menendez has primarily been called on to be a tough defender and rebounder under the basket. She averaged eight points, five rebounds and two blocks last season en route to earning All-Upstate Eight Conference honors.

Now she will be expected to be more of a dominant presence at the offensive end, something she showed flashes of at times last winter.

“I’ve been a defensive player my entire life so it is time to work on became more of an offensive player,” Menendez said. “I’ve been working on my jump shot and driving to the basket. I believe three-point plays can be a game-changer.”