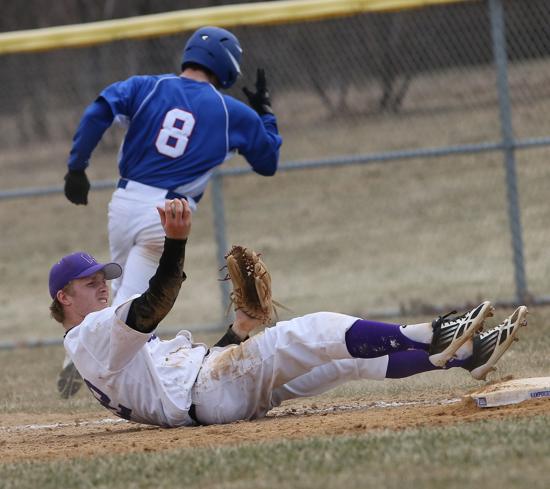 Trey Schramm, of Hampshire shows the ball at first after a play vs. Dundee-Crown in game action. Joe Shuman-For Sun-Times Media

Hampshire’s Trey Schramm came up short in his bid to knock off top-seeded St. Charles North in the St. Charles East Regional, but the week wasn’t a complete loss.

The Whip-Purs senior pitcher committed to a Division I baseball scholarship at Xavier University after an impressive offseason put him on scouts’ radar.

“It was the first visit I went on and I fell in love with the place,” said Schramm, who played infield, caught and pitched for Hampshire as a junior in spring. “I liked the campus and coaches, the baseball field.

“It’s a big weight off my shoulders.”

Kansas State, Middle Tennessee State, Arkansas State and Butler also showed interest in Schramm, who posted a 2-1 record with a 0.44 ERA and 41 strikeouts in 312/3 innings. He also batted .261 with 12 RBI.

Xavier representatives came out to watch Schramm play for Hampshire twice in the spring. Schramm then won over scouts with his participation at two showcases for talent: The Silver and Black and at the Area Code Games tryouts.

“My arm wasn’t at top velocity then, in winter, but they do a good job and I thought I did what I needed to do,” Schramm said.

“He threw 87 to 89 (mph) and went against some good hitters, some of the better Midwest hitters for players his age, and won some respect,” Hampshire coach John Sarna noted. “A lot of people spoke highly of him after seeing the way he challenged hitters.

“He’s not afraid to compete and that’s how you have to be to get attention from people at the next level.”

Schramm played for the traveling team Top Tier this summer, so he didn’t get to pitch for Hampshire’s summer team until the summer regionals began Monday.

He took a 2-0 lead into the fifth inning against top-seeded St. Charles North at North. Hampshire, the 17th seed, had already beaten 16th seed Marmion 5-1.

The Stars scored five unearned runs in the fifth and went on to a 7-2 victory to make the quarterfinals.

“We had a mental mistake and it opened the door for them and they did a good job taking advantage of it,” Sarna said. “But Trey threw a very good game.”