After experiencing one of the finest seasons in Batavia baseball history, senior pitcher Evan Acosta isn’t fazed when he’s in a big game. 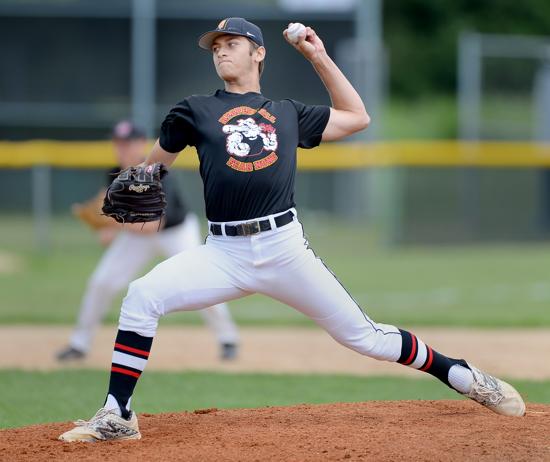 After experiencing one of the finest seasons in Batavia baseball history, senior pitcher Evan Acosta isn’t fazed when he’s in a big game.

Acosta and the Bulldogs used that calm to advance in the Phil Lawler Classic summer baseball tournament, handing second-seeded Kaneland a 5-4 defeat on the Knights’ home field.

Acosta pitched five innings to earn the win. He also delivered an RBI single in a three-run third inning that gave the Bulldogs a 5-0 lead — this after not batting during the spring season.

“It gives you so much confidence,” Acosta said of his experience as a key member of the Bulldogs’ pitching staff this past spring. “You feel like you’ve been there before, especially the way the playoffs went. I was calm out there.”

All five of the runs for Batavia (17-6) came early in the game, and the rallies all started with two outs and nobody on off of Kaneland starter Steve Limbrunner.

In the second inning, Matt Musielak singled, Tyler Kledzik tripled and Jimmy Roach doubled to give Batavia a 2-0 lead. In the third, an error with two outs kept the inning alive and Batavia capitalized. Ben Lynam cracked an RBI double, followed by an RBI single from Acosta and an RBI double from Musielak.

“When you call for a hit-and-run, you’re just trying to move somebody,” Batavia coach Matt Holm said. “Musielak hits one to the wall, then you know things are going right.”

But Kaneland (20-10-3) summoned Matt O’Sullivan from the bullpen, and he slammed the door shut after the third inning, keeping the Knights alive.

“O’Sullivan came in and did a real nice job,” Holm said. “He didn’t have anything blazing, real nice change of pace, kept us out on our front foot. We couldn’t string anything together.”

The Knights continued to climb back with O’Sullivan putting up zeroes. Three unearned runs in the bottom of the third, keyed by a two-run double from Matt Rosko, cut the lead to 5-3. It was trimmed to 5-4 in the fifth when Austin Wheatley singled and scored.

Kaneland had a very successful summer, making trips to Cincinnati and Toledo while earning the second seed in the regional.

“We’re excited with where we’re at,” Kaneland coach Brian Aversa said. “We’ve had a nice summer. We have a lot coming up. We’re looking for bigger and better things. We want to go up from here.”

Eric Huizinga came on and pitched the final two innings for Batavia to record the save and send the Bulldogs to the next round. Batavia will travel at 5 p.m. Wednesday to play host St. Charles East, a 10-2 winner Tuesday over Geneva.