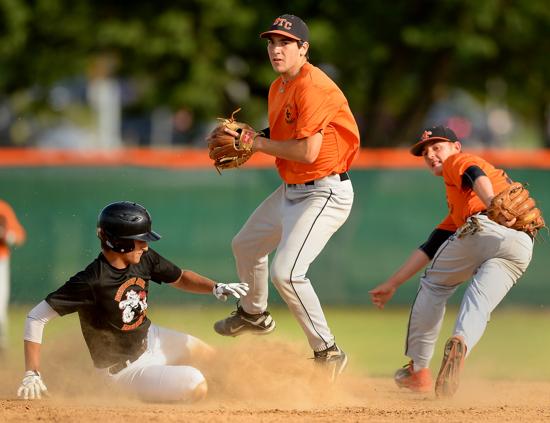 Locked in a pitchers’ duel Wednesday with St. Charles East, the Bulldogs pitcher refused to back down despite falling behind early, and Batavia produced two fifth-inning runs off Saints pitcher Austin Regelbrugge to come away with a 2-1 summer league victory in the semifinals of the St. Charles East Regional.

“You put together Batavia and St. Charles East in a game and that’s pretty much how the games go,” Batavia coach Matt Holm said. “It’s been that way since we joined the (Upstate Eight) Conference.

“They’re well-coached and they’re a great program. We like to play those tight games and see who blinks. And today, Nick didn’t blink. He did a real nice job.”

Rogalski allowed four hits, struck out two and walked one. After allowing hits to the first two Saints and an RBI groundout to Anthony Adduci in the first, he prevented any more scoring — despite four errors by the Bulldogs.

Batavia (16-5-2) will play in the regional final at 4 p.m. Thursday against Crystal Lake South. The winner advances to the Phil Lawler Summer Classic Elite Eight, which gets underway Monday at Benedictine University and North Central College.

“All my pitches were really working for me (Wednesday),” Rogalski said. “We were working on this cutter-slash-slider and I’ve been throwing it for the past two weeks. That finally clicked today.

“So I was using that pitch a lot with my fastball inside. That was my go-to pitch.”

The Saints (22-10-2) had two chances to tie the game after Eric Huizinga’s fifth-inning RBI single and an RBI groundout by Tyler Kledzik gave Batavia a 2-1 lead. Reid Olson, who had two hits for the Saints, tripled with one out in the fifth and coach Len Asquini had a suicide-squeeze bunt called, but Jake Asquini missed the sign and Olson was caught in a rundown.

“We haven’t done a ton of that (squeeze bunts) this summer,” Len Asquini said. “I would kind of let the guys swing through instead of do that stuff, see if they could hit in that situation instead of squeezing.

“So I’ve got to take part of the blame on it because when I saw he didn’t acknowledge it, I should have banged it (the play), called time and reset.”

As usually happens in that situation, Jake Asquini followed with a single.

The Saints had another chance in the seventh but Rogalski retired Jake Milosch and Olson on fly balls with the tying run at second.

“They put up that first run in the first inning, (but)  I knew it’s a long game so I knew we’d come back and score,” Rogalski said. “And I knew we have good hitting.”

They had no hitting for four innings as Regelbrugge had a perfect game going. Mitch Boyer then singled, and Matt Musielak singled with one out. Huzinga’s RBI infield single, a bunt hit and Kledzik’s RBI grounder to second made it 2-1 Batavia.

“Being able to survive four errors is ‘sticktoitiveness’ on our part, I guess,” Holm said. “Nick did a fantastic job, and his pitch count wasn’t too bad.”

Regelbrugge allowed five hits, struck out four and walked one.