After Downers North took a 6-3 lead in the third inning, Hinsdale South junior Frank Basic kept the Trojans off the board the rest of the way. 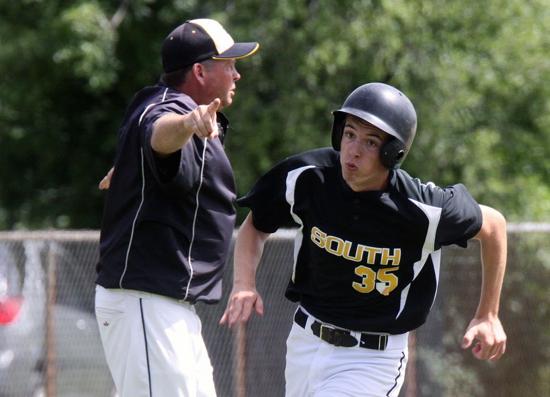 DARIEN — Frank Basic’s forkball was anything but basic during Wednesday’s Hinsdale South Regional semifinal of the Phil Lawler Classic.

The Hinsdale South junior right-hander had his pitch working in relief and the Hornets certainly needed it to hold off Downers Grove North 9-6.

With the victory, the Hornets advance to Thursday’s 2 p.m. championship against Downers Grove South in Darien.

“He did a great job throwing that forkball,” Hornets coach Paul Hoel said. “Against a great fastball hitting team like Downers that was perfect and he’s not afraid to throw it at anytime. It’s nasty. It’s got knuckleball-like movement and never breaks the same way twice.”

Hinsdale South needed Basic to step in and shut down the Trojans, especially after they scored three runs in both the top of the second and third innings to take a 6-3 lead.

“That was a positive right there, especially scoring like we did there with two outs,” Trojans coach Chad Isaacson said. “We battled and also got some two-strike RBIs so we had some good at-bats.”

The Hornets responded in the bottom of the third inning, tying the game at 6-6 on an RBI single from Zack Duffy and a two-run single from Aaron Frueh (3-for-3).

“I just felt good out there and got fastballs which I was able to hit hard,” Frueh said. “This week we’ve really been putting it together and scoring a lot of runs.” 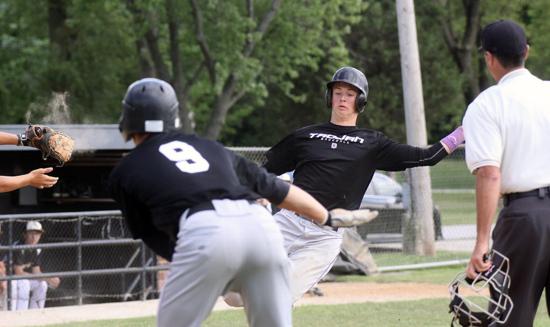 Basic allowed a couple runners to reach in the fourth inning with two outs before getting a strikeout to end the threat.

“I felt like I could shut them down,” Basic said. “My splitter was really working, keeping them off guard and then mixing them up with my fastball.”

The Hornets took the lead for good in the bottom of the fourth inning. Walks to Nate Overmann, Mike Nicosia and Alex Briscolino, the bottom three batters in the lineup, loaded the bases. Zack Duffy drove in a run with a single before an errant throw on a potential double-play ball allowed two more runs to score.

That was more than enough for Basic, who cruised the rest of the way.

“He pounded the zone and changed speeds,” Isaacson said. “He did a good job keeping us idle for the back end of the game.”

Basic allowed only one base runner over the final three innings, and that was when Jake Stevenson reached on an error in the seventh inning.

Brendan Shanahan and Jack Warwick had two hits each for the Trojans.

All nine starters for the Hornets reached base at least once, including Nicosia, who walked twice and had an RBI single.