Reeven Nathan is not one to avoid hard work. 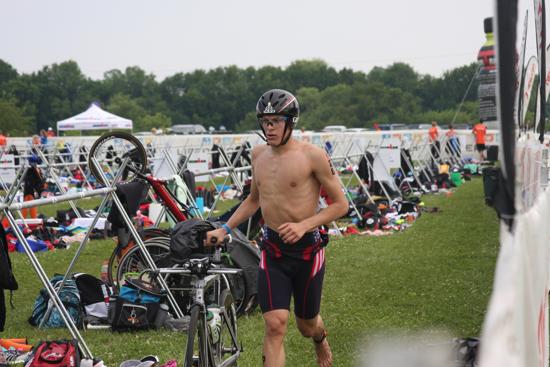 Reeven Nathan, a 2011 Highland Park High School graduate, recently competed in a triathlon in Muncie, Indiana. “The [Muncie] race went extremely well,” Nathan said. “I had one of my fastest bike splits ever.” | Submitted

Reeven Nathan is not one to avoid hard work.

Whether he’s getting up before dawn to train for a triathlon or working 12 hour days for his summer internship, the 2011 Highland Park graduate is all about commitment.

“Reeven knows the value of hard work,” Highland Park boys swim and dive coach Tim Sirois said. “He came in the fall of freshman year when the girls team was practicing and asked if it would be possible to open up the pool early to train.

That effort rubbed off on his teammates and got Nathan, now 21 years old, to be named captain of the Giants.

“Reeven really pushed us in practice,” said Zach Weiner, who now swims for Kenyon College in Gambier, Ohio. “But he would always try to keep the mood light even in the early morning.”

Nathan went on to set Highland Park records in the 200-yard freestyle and the 200 medley relay. Both records still stand today.

Nathan has long had an interest in triathlon races. He competed in his first triathlon as an eighth grader in the Chicago McDonalds Kid’s Triathlon. Nathan quickly excelled, winning the Deerfield Tin Man, the Glenview Triathlon and the Chicago Triathlon. He raced for Team USA in the Junior National and World Championships and has been recognized as an All-American by the USA Triathlon Federation.

Nathan is a junior at Amherst College in Massachusetts, majoring in Middle Eastern studies and physics. He founded the Amherst Triathlon Club and is also a member of the college’s swimming team. But Nathan will be taking a year off this fall to begin studying Arabic at the Hebrew University of Jerusalem. Before that, Reeven is finishing up his 60-hour-a-week architectural internship and, of course, competing in triathlons.

He’s participated in four this summer, racing in California, Michigan, Chicago and this past weekend in Muncie, Indiana.

“The [Muncie] race went extremely well,” Nathan said. “I had one of my fastest bike splits ever.”

Lest one think that Nathan always wins or excels, he recalls this story.

“I’m a competitive person. My younger brother Levy, who did Coho Swim Club [in Deerfield], was doing flip turns when he was seven,” Nathan said. “I decided to race him back then, but he would win.”

Nathan has high hopes for his brother, a strong swimmer who will be a sophomore at Highland Park.

“Hopefully he will beat my 200 free record,” Nathan said.