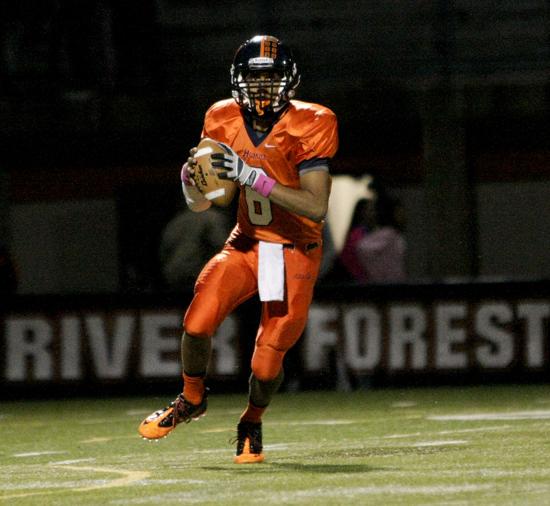 Oak Park-River Forest quarterback Lloyd Yates is headed to Northwestern. The 6-foot, 190-pound prospect added an offer from the Wildcats just 48-hours before committing on Thursday.

“I’ve wanted to go to Northwestern for a while now,” Yates said. “And honestly, the people there sold me. They are great people and I just didn’t see a point in waiting any longer.

“Getting the offer was exciting. I was happy to hear about it because Northwestern is a school that I have always been interested in.”

Yates will join Oak Park-River Forest teammate and five-star rated offensive lineman Adam Lemke-Bell, who committed to the Wildcats at the end of May. Lemke-Bell played a key roll in recruiting Yates to Northwestern.

“Getting to play college ball with him, It’s indescribable,” Yates said. “We’ve built a strong relationship over the past couple of years and it’s awesome knowing that I’m going to step on campus the first day with a guy that I’ll do anything for.”

The Oak Park-River Forest pair are half of the four area prospects who have pledged to play at Northwestern next season. Stevenson wide receiver Cameron Green and Wheaton Warrenville South linebacker Tommy Vitale round out the area recruits.

“I really like the people, and the coaches are great,” Yates said. “The other class of 2015 commits are great as well as everyone involved with the program.”

Yates also has plenty of family connections with the Wildcats, his brother, dad, cousin, and great-grandfather all graduated from Northwestern to pursue medicine.

“They know it is a great school that is close to home and it has good football,” Yates said. “It didn’t take much convincing them.”

The dynamic prospect recorded over 2,000 yards and 20 touchdowns as a junior and also had offers from Northern Illinois, Akron, Western Michigan, and Illinois State. According to Scout.com national recruiting analyst Allen Trieu, Yates will fit in well with Northwestern's offense.

“Yates is a good fit for the Wildcats. He will remind some of Kain Colter, but I think he comes out of high school ahead of Colter as a passer at the same age,” Trieu said. “The main concern is size, but he’s an intelligent player and his athleticism and sixth sense for making something out of nothing are among his chief assets.”