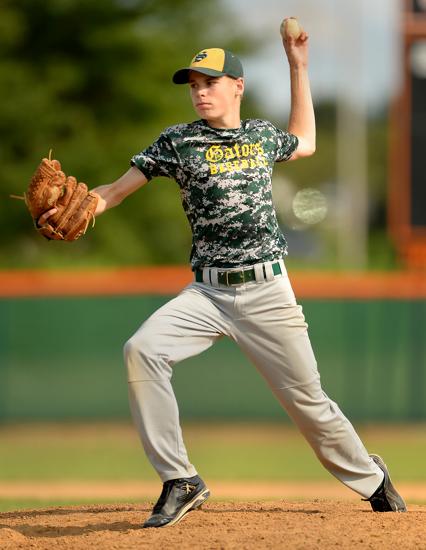 Crystal Lake South played error-free ball, scored on four of their six opportunities, and Siesennop snapped off one curveball after another to completely baffle the Bulldogs in a St. Charles East Regional title game played in just under 90 minutes.

“That’s my go-to pitch in tight situations,” said Siesennop (3-0), who came up to the varsity late last spring. “I just tried to keep them off balance. They got onto my fastball early, which later on I needed to use more curves.”

Siesennop estimated he threw about 60 or 70 percent curveballs, and after Batavia had two hits in each the first two innings without scoring, it became apparent the curve was the Bulldogs’ nemesis.

“I walked over and I said, ‘If he throws you one more fastball, they’re not very smart,’” Batavia coach Matt Holm said he told his team after some early frustration against the curve. “‘You guys are going to have to prove that you can hit the curve ball.’ There were only a couple that we put in play hard.”

Batavia’s Jim Roach led off the game with a hit and tried to score later in the inning on a lined single by Nick Rogalski, but center fielder Collin Chubb, who had thrown out a St. Charles East runner trying to score the winning run in Wednesday’s semifinals, threw out Roach at the plate.

Batavia threatened again the next inning with hits by Mike Fossali and Joe Burke, but Siesennop induced Tyler Kledzik to ground out, and he controlled Batavia the rest of the way.

“My sophomore season I got a lot of chances to show what I could do,” Siesennop said. “Toward the end of the year I got a start on varsity which really developed me more and gave me more experience at a higher level.”

Batavia starter Eric Huizinga got the loss, but allowed only five hits. The Gators got a run without a hit in the first after Chubb was hit by a pitch, moved to third on a sacrifice and wild pitch, and came in on John Constantino’s groundout. The Gators added a run on a Batavia error in the second following Mike Avella’s hit, then pinch-runner John Smerecky stole home in a double steal play in the third. The final run came in the fifth on Nick Van Witzenburg’s RBI single. South had four runs on six hits.

“We put up one at a time,” South coach Brian Bogda said after his team qualified for state for the second time in three years. “I was proud of the way the guys battled, the way they added on.

“They didn’t get complacent and weren’t happy with a one- or two-run lead. Earlier this week we played a 12-inning game (against Oswego East) after sitting on a 2-0 lead. That wasn’t that fun to stay up that late.”

Batavia finished 18-6-1 and showed it has reloaded since dominating the Upstate Eight River in the spring.

“I’m a very pleased man,” Holm said. “And I feel like this is a group — and we’ve got four senior pitchers — that are going to give us a great spring (of 2015). Glen (Albanese) there, who finished for us, is only going to be a sophomore. That’s given us some upside to look at.”