Varsity football and basketball players Matt Brandeis and Sean McCormack barely have enough hours in the day this summer. 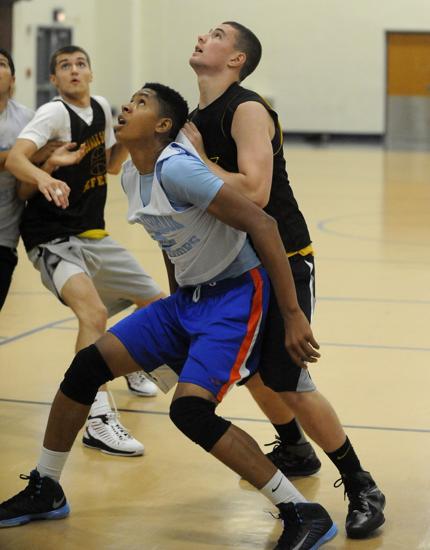 For senior Matt Brandeis and junior Sean McCormack, each day in June seemed to be a continuous cycle of practices and trips to and from Hinsdale South.

As two-sport varsity athletes attempting to play both football and basketball last month, that meant getting up early in the morning for football, and coming home late at night on Tuesdays and Thursdays from the Riverside-Brookfield boys basketball summer league.

McCormack also worked shifts — usually on Mondays, Wednesdays and Sundays — at his summer job as a lifeguard at Woods Pool for the Burr Ridge Park District.

“I had to give them both of my schedules [for football and basketball],” McCormack said. “They all know me because that’s where I started swimming lessons. I’ve been a lifeguard since the beginning of June. I do it pretty much for fun.”

To squeeze in the job, McCormack put in late hours on days when he was not playing at the R-B summer league. He usually had 3 p.m. to dusk shift in the lifeguard chair.

Both Brandeis and McCormack attended football practices Monday through Thursday from 6:30-8:30 a.m., followed by weightlifting and conditioning workouts until 10:30 a.m.

Daily basketball practices were 1:30-3:30 p.m., followed by summer league games on Tuesdays and Thursdays that could begin as early as 5 p.m.

Since neither Brandeis nor McCormack belong to AAU basketball teams, their sports schedule is now down to just football practices.

“I like guys to be involved in multiple sports and I know our basketball coach [Brett Moore] does too,” Hinsdale South football coach Mike Barry said. “It develops a well-rounded athlete. McCormack and Brandeis are competitors who have improved as a result of being in multiple sports.”

Brandeis said trying to pack all his commitments into one day is as difficult as it sounds.

“Usually [in the summer], you tell friends that you can’t hang out all week,” Brandeis said. “I’m usually up at 5 a.m. and at football camp until 10:30 a.m. Then you have basketball camp and you’re constantly going to games at night. It’s rough. You have no time at all.”

Brandeis, a 6-foot-4, 238-pound tight end/defensive end, and McCormack, a 6-5, 190-pound backup quarterback, were scheduled to compete in the annual West Suburban Conference 7-on-7 Challenge last week at Addison Trail.

“I think [Barry] will use me more as a blocking tight end,” Brandeis said. “I did play two ways as a sophomore, but doing it on varsity is whole new level.”

As an incoming senior, Brandeis attends college football camps in order to attract recruiters later in the fall. He has attended camps at Illinois, Northwestern, Central Michigan and Illinois State.

He said Illinois State coaches projected him as a nose tackle or offensive guard, but other schools believe he can play defensive end.

“It’s really exciting,” Brandeis said. “College football has always been my dream and now it’s becoming a reality. We’ll see where I end up.”