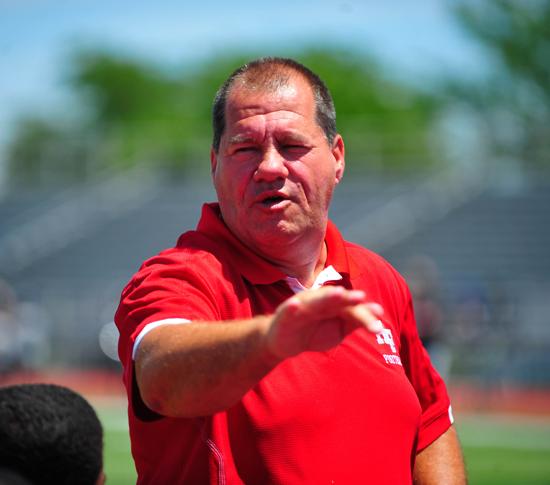 Much of the firepower from that explosive offense returns in the form of running backs Deonte Harley-Hampton and his brother, Devonte, and receivers James Sheehan, Kendrick Pryor and Jared Sharp.

If the performance from the July 11 Battle of the Border 7-on-7 Passing Competition is any indication, the Vikings will have little difficulty reaching the end zone in 2014.

“We’re going to put up a lot of points,” said Sheehan, who also plays on H-F’s baseball team. “We have a lot of weapons. We have guys who have played in this system and are more experienced. That’s only going to help us.”

The Hamptons, who are twins, look physically stronger and faster, and Sheehan, at 6-foot-3, is a big target with good speed.

Senior Jaylon Walton and sophomore Tyler Nutall will get opportunities to add some fireworks out of the backfield.

“In regard to throwing and catching, we’re OK right now,” H-F coach Craig Buzea said. “We have a bunch of kids returning that know our system. But we’ve got some things we need to work on.”

Quarterback Bryce Gray, heralded since he entered the school’s hallways as a freshman, has the edge on the starting spot, though sophomore Trevor Johnson remains in the hunt. Gray, a junior, is a prototype drop-back passer with a strong arm. Johnson relies more on his legs.

“Bryce hasn’t taken any varsity snaps yet,” Buzea said. “He looks good. He has a strong arm and he’s a smart kid. Trevor looks good, too. But it’s Bryce’s job to lose right now.”

While six starters return on both offense and defense, the lone holdover on the line is junior Desmond Bland, an All-Area performer last season. Bland, whom Buzea refers to as the team’s “Go Daddy,” likely will see action on both sides of the ball.

Linebackers Justin Chu and Preston Sanders, both seniors, not only will be relied on to execute on the field, but provide valuable leadership, primarily to a raw secondary.

“Our secondary is basically new,” Buzea said. “We’re going to need some guys to step up.”

The Vikings’ two losses last season were by a combined 10 points, 27-21 to Bolingbrook and 24-21 to Naperville Central, the latter in the second round of the Class 8A playoffs. H-F led for the majority of both games.

Sheehan, who may play some end on defense, is confident the Vikings will overcome any adversity.

“When the going gets tough, we have to rally together and keep our chins up,” he said. “There’s a lot of talent on this team. Some of it is raw, but we’re very excited to get the season started.”