Crystal Lake South overcame a three-run deficit in the seventh inning to earn a 10-3 victory over Downers South at Lawler Classic. 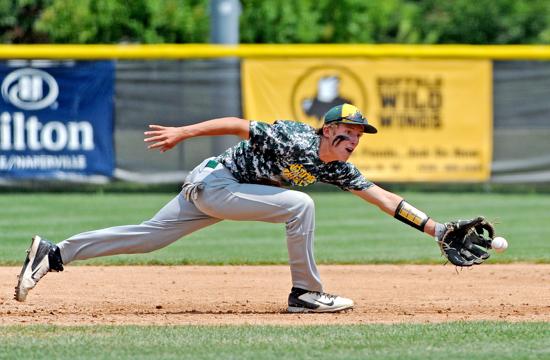 Crystal Lake South could only muster three hits through seven innings against Downers Grove South at the Phil Lawler Classic at Benedictine University on Monday.

Thankfully, a couple hit batters and a walk allowed the Gators to force extra innings, where their bats came alive in a 10-3 come-from-behind victory in eight innings.

Crystal Lake South (19-5-3) didn’t do much against Mustangs’ right-hander Ryan Taylor, who appeared en route to a 3-0 shutout after retiring the first man he faced in the top of the seventh, but, then he walked back-to-back hitters.

Tommy Matysik relieved Taylor but walked a batter and hit two more to make it a 3-2 game. Zack Jones came in for Matysik and walked Garrett Bright to tie the game.

“We flat out gave them three runs there with walks and hit batters, and a couple hit batters with two strikes,” Mustangs coach Darren Orel said. “Winning 3-0 with one out and nobody on is usually a pretty good recipe, but you know, walks will kill you.”

Downers South (14-7) had a chance to answer in the bottom of the seventh. The Mustangs put runners on first and second base with just one out, but Danny Oriente bounced into an inning-ending double play against left-handed reliever Timmy Siesennop.

“I knew he was their No. 3 hitter, but I knew if I threw it low in the zone I could roll a ground ball and get a double play,” Siesennop said. “Being able to get out of that was amazing and really got our spirits up. After that, we felt like we could win this game.”

“That was a big play getting out of that inning unscathed and then getting a chance to score a few runs,” Gators coach Brian Bogda said. “These guys have a no lose attitude and keep fighting. They just care so much about each other and want to keep going.”

Crystal Lake South looked like a completely different team in the top of the eighth. The Gators sent 11 batters to the plate and recorded seven runs on seven to take the lead.

“We had our backs against the wall and we just know to never give up,” Crystal Lake South’s Derek Bulger said. “Their starter pitched a heck of a game, but we knew if we got to their bullpen we could get a lot of runs.”

Downers South took a 1-0 lead in the fourth when Zach Radde scored on a wild pitch and a throwing error. The Mustangs added their final two runs in the fifth. Oriente had an RBI ground out and Corey Vondra stole third base and continued home on a throwing error.