After allowing four runs in the first inning to Prospect, St. Laurence responded with a dozen unanswered runs for a 12-4 win in a pool-play opener of the Phil Lawler Classic. 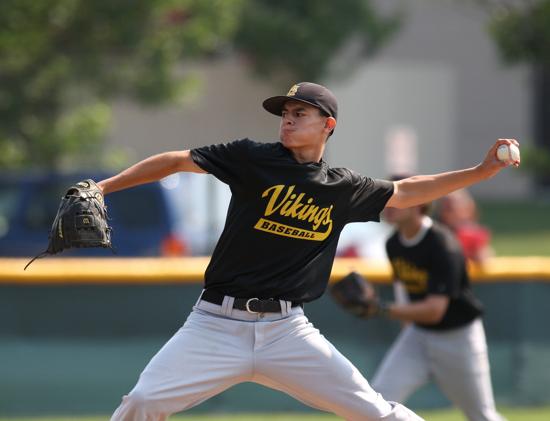 Yes, St. Laurence was nervous out of the gate Monday morning in the Phil Lawler Summer Classic.

No, it didn’t last long.

The Vikings spotted Prospect a four-run lead in the top of the first inning at North Central College in Naperville, then roared back with a dozen unanswered runs for a 12-4 win in a pool-play opener.

St. Laurence (15-2) plays Nazareth (22-11) — a 4-3 eight-inning winner over Glenbrook North — at 10 a.m. Tuesday at Benedictine in Lisle. A win sends the Vikings on to the semifinals of the unofficial summer state tourney, while a loss would drop them into an elimination game immediately afterward.

But Anthony Robles, Mike Finger and Frank Greco weren’t looking that far ahead Monday when they quickly found themselves in a hole against Prospect.

Robles retired the first two Knights he faced, but then came a walk, three hits, a wild pitch and an error. Just like that, it was 4-0 in favor of Prospect (25-6-1).

“First inning, I struggled a little bit,” said Robles, who admitted to some early anxiety. “I got the first two outs, walked that third batter. Shouldn’t have happened.”

But even though it did, there was no move to the panic button by the Vikings.

“We didn’t let ourselves get down,” said Finger, who was 2-for-2 with a walk, a hit by pitch, two runs and three RBI. “We knew we could come back against this pitcher.”

And Finger stayed confident in Robles, his high school and travel ball teammate. “He starts off kind of shaky, but once he finds it, he’s really good,” Finger said.

“We knew if we could just ... score here and there, we didn’t have to get it all back at the same time,” he said. “We kept chipping away, a little bit, a little bit.”

St. Laurence went two up, two down in the bottom of the first before staging a rally, capped by Greco’s two-run single that cut the deficit in half.

“Got a little nervous first at-bat, state playoffs,” he said. “But once you get into it, you know, it just starts getting easy for you. It becomes fun again.”

The Vikings scored on a balk in the second to make it 4-3 and went ahead 7-4 with a four-run third keyed by Jack Cavanaugh’s RBI double and run-scoring singles by John Riordan (2-for-4, run) and Tom Farrell (2-for-4, RBI, 2 runs).

The runs kept coming: one in the fourth, three in the fifth, one in the sixth. Meanwhile, Robles settled down, retiring eight straight at one point. He left after five innings, having allowed four hits and two walks while striking out two.

“Anthony’s game has to be where he throws strikes,” St. Laurence coach Pete Lotus said. “He’s not going to blow it by a lot of guys. He’s been great for us all summer just by doing that.”

“My fastball was great and I was locating it pretty good, inside and outside,” Robles said.