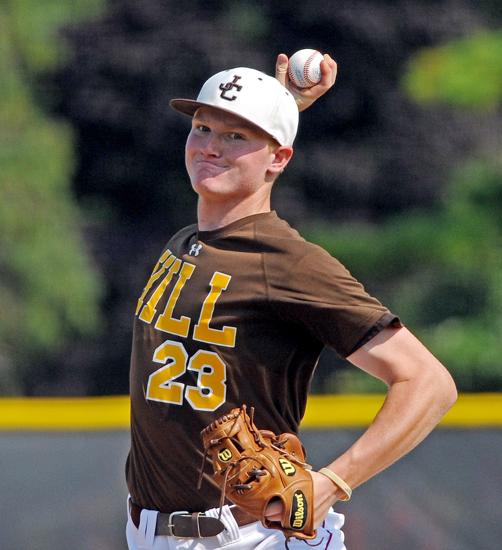 The setting was Benedictine in Lisle for the Phil Lawler Classic, which seemed perfectly fitting since the late Phil Lawler was a longtime pitching coach in Naperville.

Cilano and Fellows each tossed seven shutout innings before giving way to the bullpens in extra innings. The Hilltoppers finally broke through in the ninth inning, getting a two-out RBI single from Connor Brandon to earn a 1-0 victory.

“For both of those guys to put up zero after zero after zero, you can’t say enough,” Wolves coach Glen Pecoraro said. “I’m disappointed because we had numerous opportunities with guys on second or third and we didn’t execute when we needed.”

Joliet Catholic delivered in the bottom of the ninth against Matthew Mohapp. KC Simonich walked with two outs and then stole second to set the stage for Brandon, who ripped the game-winning single to the left-center field gap.

“Just trying to do whatever I can to get the run in,” Brandon said. “We got the guy on second and I was just trying to get on base and help the cause. It just worked out my way. I got my pitch, tried to keep a clear mind and hit the ball.”

Brandon is one of the feel-good stories this summer for the Hilltoppers. He seldom saw the field during the spring and now has become a regular fixture in the starting lineup.

“It’s crazy how much he’s transformed,” Dalesandro said. “He went from junior year when he didn’t even make the team and is now in the starting lineup as a hitter. He’s done nothing but great things for us.”

The Wolves had runners in scoring position in the sixth, seventh and ninth innings but couldn’t deliver a clutch hit or sacrifice bunt when they needed them most.

They had their best opportunity in the ninth against Hilltoppers reliever Nick Dalesandro. Carson Getzelman was hit by a pitch before moving all the way to third on an error.

Prairie Ridge missed out on its first chance when Getzelman was thrown at home on a bunt. The Wolves’ inning came to a screeching halt when pinch-runner Cory Lamb was easily tagged out when Hunter Martin struck out on a two-strike squeeze attempt.

“It’s 0-0 in the ninth and we’re just trying to figure out a way to win a game,” Pecoraro said about the decision to bunt. “(Bunting) is a big part of our offensive game. We’ve done well with it for years.”