After being sidelines for most of his sophomore and junior seasons, Matt Rahn is ready to lead Aurora Central from behind center. 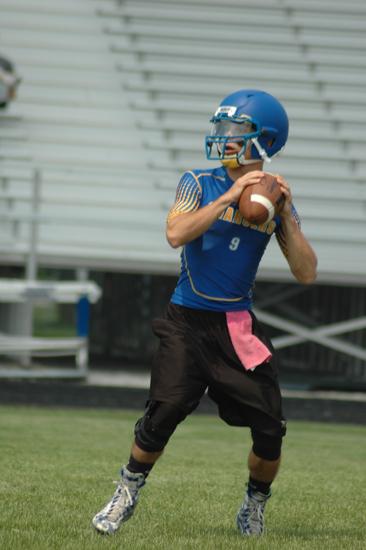 Matt Rahn will be the starting quarterback for Aurora Central. | Rick Armstrong/Sun-Times Media

Matt Rahn isn’t looking over his shoulder to see if there’s a dark cloud following him, but it would be hard to blame him if he did.

The Aurora Central senior has more important things to do than look back. Time is running out.

“It’s just making this year that much more important,” Rahn said Saturday during a break between games at ACC’s 16-team 7-on-7 tournament.

The Chargers’ starting quarterback was referring to his string of unfortunate luck that kept him off the field all of last season and during a critical juncture his sophomore year.

Rahn started at free safety and moved into a starting role on offense in the fourth game of the 2012 season. He helped the Chargers to four straight wins that helped send them to the playoffs for the first time in 15 years.

Unfortunately, he came down with mononucleosis and missed the final two regular-season games and a 42-23 playoff loss at St. Joseph-Ogden.

The following summer, the news was even worse. He tore the anterior cruciate ligament in his right knee and had to have surgery that sidelined him for the season as the Chargers had another one-and-done playoff.

“It was the day before this 7-on-7,” he said. “Non-contact drill. Spin move. It didn’t look any different. We had it filmed and I’ve watched it plenty of times.”

He said he just felt a “pop” and didn’t realize how serious it was because there was no pain, just some instability in the knee with the same injury his older sister had been through.

“It wasn’t easy,” he said. “I ended up being the ball boy on game nights just trying to help out.”

“He certainly made a lot of plays for us in 2012,” Casey said. “But when I’m hard on him, I tell him, ‘Remember who you played. You beat teams that were something like a combined 8-32.’

“As far as him being a three-year varsity starter, it’s probably a little farfetched to say something like that.”

Still, Rahn’s skills should help diversify an ACC offense that may not be as deep as last year but still has some talent as the program moves to the Metro Suburban West.

“I was cleared from rehab in five months and played baseball (pitcher, center field) in the spring,” Rahn said. “I think of it as a freak injury. I’m not hesitant, not particularly worried about getting injured.”

He won’t start on defense either.

“If we get a tight spot in the fourth quarter, we might use him at free safety but we’ll see,” Casey said.

“He’s healthy. He’s playing well. He’s learning a lot more. We look different offensively than we have in the past but this was our plan last year when he got hurt and we had to tailor it back. We found a way (power running) to win six games.

“Matt’s sophomore year he was still a little dude. He’s a lot stronger now. His 40 time is faster. The elephant in the room will be the first time he gets hit. I’m sure it will shake him up a little bit until he actually picks himself up off the ground and makes sure everything is intact.

“As much as we want to run him, he’s not gonna be able to run 20 times a game. We have a good chance if we can keep him upright. We can do a lot of good things with him.”