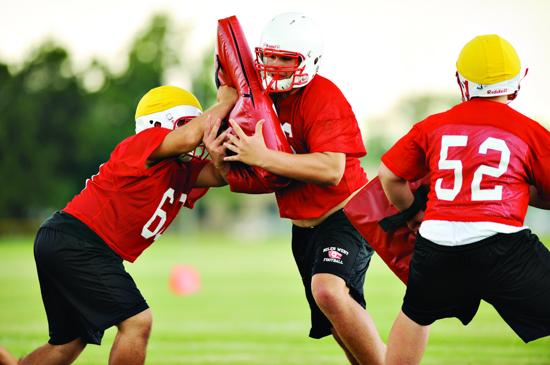 The 22-year-old had recently transferred to Winona State from Illinois.

Information about his cause of death was not immediately available.

Winona State associate head coach Cameron Keller told the Minneapolis (Star Tribune) that Afryl collapsed not long after the beginning of the voluntary workout and the program’s strength and conditioning coaches administered CPR until paramedics arrived at the field.

Afryl committed to Illinois under former head coach Ron Zook and redshirted in 2010. He played in one game for the Illini in 2012 before transferring to Winona State.

Illini coach Tim Beckman said in a statement that his players were saddened to hear of the death of a “great teammate.”

Afryl wanted to become a teacher and high school coach, his mom Sue wrote on a GoFundMe.com page.

She had raised over $30,000 for his burial on the site as of Wednesday morning.

Several people associated with the Illini have shared condolences on social media.

Our thoughts and prayers go out to the Afryl Family with the loss of former Fighting Illini Shawn. He will be greatly missed.

Shawn Afryl, you will definitely be missed my Illini oline brother! I'm in a lost for words. #R.I.P #illini4life

We lost a good one today way too soon. R.I.P Shawn Afryl you'll be missed, my prayers are with his family. #illini4life