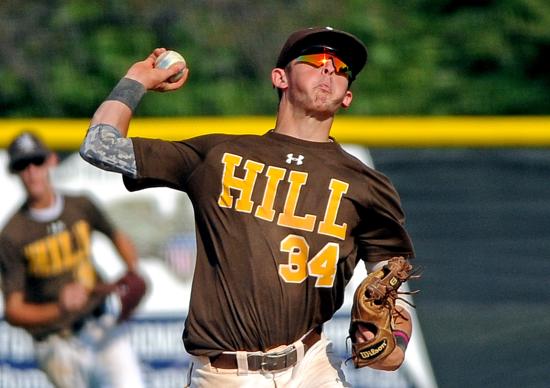 The Joliet Catholic shortstop had a career day on the basepaths Tuesday, stealing five bases and scoring three runs to lead the Hilltoppers to a 9-0 victory over Crystal Lake South at the Phil Lawler Summer Classic at North Central College in Naperville.

The victory advances Joliet Catholic (17-0) to Wednesday’s semifinals at Benedictine.

“That’s by far the most (steals) I’ve ever had,” Boe said. “We always try to put pressure on the defense, so I do my best.”

Boe, an Iowa commit, wasted no time in applying the pressure. He led off the bottom of the first with a single, stole second and third before scoring on Keegan Tyrell’s groundout.

The Hilltoppers made it 2-0 when Nick Delesandro reached on a two-base throwing error and scored from second when Drake Fellows grounded out to short on a hit-and-run.

The early runs helped relax the Hilltoppers while spooking the Gators (19-6-3), who allowed seven stolen bases and committed five errors.

“It was huge,” Boe said of the good start. “My job is to get on and get over and then have the guys behind me get me in, and that’s what I did today. From the earlier innings, I knew (the Gators) weren’t going to get me, so we put an emphasis on putting pressure on them, making good things happen.”

Joliet Catholic increased the lead to 5-0 with a three-run third. Boe, Tyrell and Delesandro all walked and scored. Fellows drove in Boe, who had stolen second, with a sacrifice fly and KC Simonich drove in the other two with a single to center.

Mike Quiram led off the fourth with a double and scored on an RBI single by Boe, who went 2-for-2 and reached base all four times up, to make it 6-0 in the fourth.

The Hilltoppers then scored three runs without the benefit of a hit in the sixth, thanks to walks to Boe and Tyrell and a pair of throwing errors. Only four of the Hilltoppers’ runs were earned.

“They put the pressure on us and we just didn’t respond how we’re capable of responding,” Bogda said. “They run the bases very, very well and they’re very well-coached in that.

“That’s an area I even told our guys, ‘Watch how they run and get leads.’ They do a nice job of that and putting pressure on other team’s defenses.”

Tyrell and Simonich, who went 2-for-3, had the other stolen bases for the Hilltoppers.

“We’re not giving them signs,” Joliet Catholic coach Jared Voss said. “We’re not taking any credit. Mitch is on his own. He just goes.

“Summer we allow more rope than in the spring. That’s how they get experience and learn how much they can stretch things.”

“He’s a great pitcher,” said Boe, who helped out with four assists and three putouts. “He was on (Tuesday).”