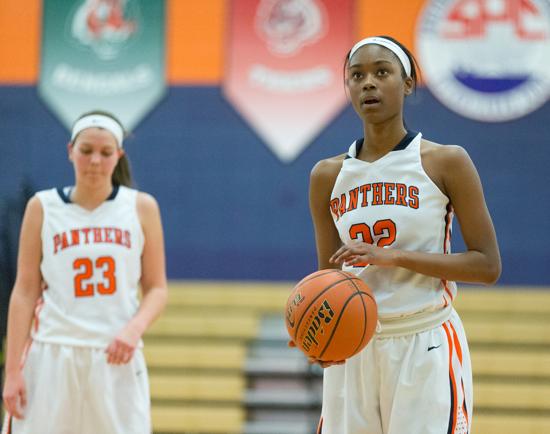 So when she was ill, missed part of the AAU season this summer with the Illinois Elite and Southern Illinois University at Edwardsville still kept in contact with her, it made an impression.

Last week, Wilder received a scholarship offer from the Division I school and accepted, ending her college courtship early as she prepares for her senior season with the Panthers.

“They were there for me,” Wilder said. “I felt like I should consider them because I felt like they really cared. I always wanted to know where I was going before the high school season so I could just focus on that. It definitely feels like a big weight off of my shoulders. I can devote my time to the team and schoolwork.”

Pohlmann pointed out that Wilder went on other unofficial visits, but SIUE was the only formal offer she received. She jumped at the chance.

“I always tell the players that the way it works is if a coaching staff is on you early, that really means that they want you to be in their program. There’s a lot to be said for loyalty. It’s pretty exciting.”

Wilder averaged 13 points, 3.8 rebounds and 2.5 assists for last year’s 24-win Oswego team that reached the sectional championship game. She is one of four returning starters for a team that has high expectations.

“I feel like we have a target on our back, especially in the conference,” Wilder said. “I really hope that we can get back to the sectional finals and we have some unfinished business.”

Wilder said she plans on studying education in college. SIUE recently joined the ranks of Division I teams that will play in the Ohio Valley Conference. The Cougars are coached by Paula Buscher and went 11-19 last year.

Wilder joins her brother Thomas, who is signed to play basketball at Western Michigan, and her step-brother Desmond Meyer, a cross country runner at Chicago State, as family members to receive athletic scholarships.

“I just feel really blessed,” Wilder said. “My parents have put in so much hard work and money into making sure that we play for great teams and have the nicest stuff, so I feel like this is repaying them.”