Western Springs-based Lions Jrs. had 144 players in its sand volleyball program this summer, after just eight joined four years ago.

But they do believe competing on the sand helps them become better high school players.

The Lyons teammates spent Saturday at North Avenue Beach in Chicago competing for the Lions Jrs. in an 16U AAU national qualifier. After becoming good friends last fall as freshmen volleyball players at Lyons, they are experiencing their first summer as partners on the sand.

They agree that the beach game offers a different challenge.

“It’s hard for me to jump at all,” Vulich, from LaGrange Park, said.

Both are playing their second summer of sand volleyball. Grodek, a 5-foot-9 outside hitter, had a different partner last summer. Vulich was away on a European vacation for most July and last played competitive sand volleyball two years ago.

“I am having a lot of fun,” Vulich, a defensive specialist, said. “I played 14U the last time. It’s a different game than 16U. In 14U, you have to have good ball control by getting it over the net and you’ll win. In 16U, every shot counts. You just can’t serve.”

The duo formed one of three 16U girls teams from Lions Jrs. at North Avenue Beach, along with Alyssa Ramir and Keara Schmitt, and Sophie Allison and Abby King. Connor Hankins and Daniel Benson competed in the 16U boys tournament. In all, Lions Jrs. entered 23 teams for the AAU qualifier. 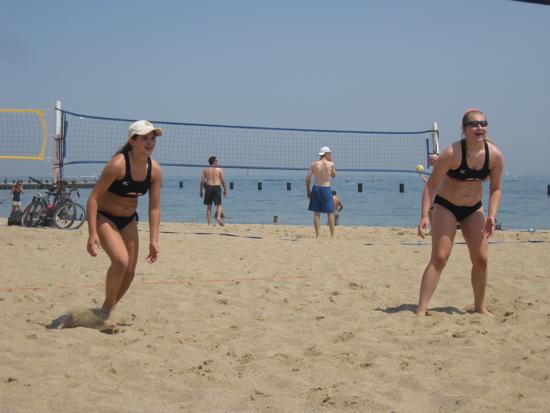 Abby Vulich (left) and Gwen Grodek plan to try out for the Lyons sophomore team at Lyons next month. | George M. Wilcox/Sun-Times Media

The popularity of beach volleyball has exploded at Lions Jrs. The program is in its fourth summer and attracted 144 players, including 16 boys, after having only eight participants in its first season. The club added a second practice site at Ackerman Park in Glen Ellyn, in addition to Sedgwick Park in La Grange.

“It has taken off,” Cox said. “Girls and guys see it as an option to play in college if you want. Most girls play to improve their indoor game.”

Grodek and Vulich, who did not advance on Saturday, plan to play together again Aug. 3 in a USA volleyball national qualifier at North Avenue Beach. They also participated July 5 in another AAU qualifier.

“This season has helped with my vertical jump in the sand,” Grodek said. “You have to be faster [in the sand] and learn different shots. You become more vertical.”